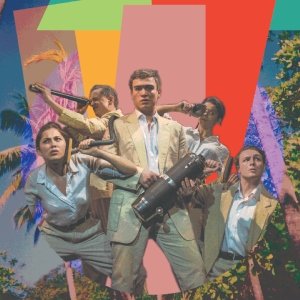 Graham Greene’s political farce about a vacuum cleaner salesman turned bogus intelligence source-for-pay to the British Secret Services has always been a brilliant example of the hilarity that can ensue when obsessions and avarice meet. Spies Like Us Theatre has seized the opportunity of a balmy pre-revolutionary Cuban setting inhabited by the British ruling class in its full absurdity to go all out with their physical theatre japes. As such, much jaunty amusement does indeed ensue.

Director Ollie Norton-Smith creates his world without the aid of any stage sets and only the most limited number of props. With the performing troupe of four men and two women multi-rolling as everything from local informants, German assassins and the titular Man in Havana, James Wormold (played by Alex Holley) to airplanes and taxis – this team has a brilliant time whilst working up a sweat very fitting of a Caribbean climate. For the audience, it is a ride of jolly good fun and some impressive improv-style deployment of just a few vacuum cleaner parts serving as feather boas and canine creatures as much as the ersatz ‘secret weapons’ from which Wormold profits.

Whilst Greene’s story is very much one of trenchant dialogue (thus lending itself so well to the classic 1959 film starring Alex Guinness), this rendition has a Beyond the Fringe revue quality to it. Spies Like Us’ production glides and clowns through locations, interactions and characters in no small part thanks to Ollie Norton-Smith’s movement and sound design (the latter with Oscar Maguire). Proper comic delivery requires orchestration and precise delivery. In this show, the jeopardy of whether the cast will hit their notes is heightened with the central physicality of their interpretation. Thankfully this troupe doesn’t drop a beat in their physical delivery – keeping up the pace and the manic energy of the escalating farcical tension.

Mamboing between moments, Hamish Lloyd Barnes who plays Hawthorne and numerous other characters, gives a particularly energetic performance with wonderful facial elasticity that is just the other side of slapstick. I had a moment of wondering about the Cuban characters played for laughs with central-casting accents and mannerisms, but everyone is fair game in this production with the British government the butt of the harshest jokes. Gabriella Marguiles, who plays Beatrice amongst others, and Rosa Collier, as Wormold’s entitled teenage daughter, Milly, show fantastic range as they finesse through their various roles, especially as the original story is a little light on winning depictions of women.

The Vault Festival is about adventurous theatrical engagement; whilst Our Man in Havana is perhaps not the most daring or shocking production the festival has on offer, it delivers impressively as a short sharp dose of screwball fun brought to you by young and exciting talent.

Havana, Cuba! A Cold War world of suspicion, suspense and silliness. Amidst the sultry climes of Havana our heroes twirl, twitch and tango away from enemy agents, MI6 and the truth. Jim Wormold, a run-of-the-mill vacuum cleaner salesman turned accidental spy, resorts to fabricating ludicrous military reports in order to save his business and satisfy his decadent daughter, beginning a hilarious and improbable rise to the top of the British Secret Service. By popular demand, Spies Like Us return with their award-winning sell-out hit which will leave you gasping for breath and an ice-cold daiquiri.