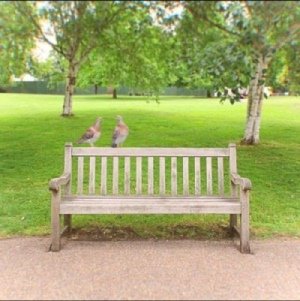 There are a lot of pigeons that come into my garden. I see the sleek, sylph-like dove variety, swooping and pecking and flitting away PDQ. Then there are the big, fat waddlers who gorge themselves on the bread and then attempt to take off like ungainly jumbo jets, only just about getting airborne and retracting their undercarriages as they flirt with the top of the fence. This show is mostly like the latter: takes a while to get airborne after lumbering around for a while with some over-used, rather laboured pigeon-shagging jokes before finally taking off and showing that it has some heart, it has some emotional intelligence and it has something to say about relationships. And, I suppose inevitably, about the millennial obsession with smartphones.

Estate Agent Mark (Max Fricker) is having an early-life crisis as he spends his lunch break trying to contact his one-night-play-away boyfriend so they can talk through the issues. His vain attempts continually lead him up the voicemail cul-de-sac, to his growing frustration. He’s joined by bag lady Candice (Marlene Sidaway) who, in her initially cheery, smiley-face outlook on life is hiding a late-life crisis to do with her fifteen-years-estranged daughter.

Sidaway – billed as “Maureen from Mum” – who clearly knows her way around a stage – had to make use of the prompt on occasion and often seemed hesitant on cues. And, far be it for me to proffer advice to such an experienced and well-travelled actor, you cannot act convincingly with a mouth full of a dry bread roll. It appeared that as she got agitated – about lines, cues, timing, whatever – she took more and more premium-size bites of the offending roll and then mumbled, croaked and semi-choked her inhibited way through the dialogue. Take a nibble at the start, love, and then pretend to eat the rest. That’s acting. It’s a shame because – once she got over playing to
the gallery with the profusion of pigeon jokes and managed to get some (sorry about this) saliva back in her mouth, the last ten minutes showed us a moving and emotional performance that tugged at the heartstrings and gave us something to savour. A note, perhaps, for director Dugald Bruce-Lockhart to get his teeth into in what is otherwise a neatly directed show.

On the other hand we have in Fricker – who is being “introduced” according to his billing – a real jewel who takes his character way beyond simple Estate-Agent-esque parody giving Mark a genuine and affecting depth and encapsulates the millennial/snowflake/twenty-something fear of the real world that exists outside his pink, hand-held, electronic communicator that, apparently, none of us could ever do without. Understated at the start, with a mildly belligerent edge as Candice probes his problems, Fricker gives us a full-on exposé of what it’s like to be young and in love and possibly dumped and stranded in a park with a rough-sleeping granny-figure. It’s a performance that lurches between light-hearted millennial banter to mesmerising emotional turmoil which draws us in and gets us to understand and recognise our own ‘it’s complicated’ issues.

Though Penelope Rawlins’s play tends to err on the twee side of soul-searching it’s an interesting exploration of relationships in the modern, technological, social media maelstrom that gives us some clever and pertinent insights. I suppose that once she called the play Pigeons then they had to feature in all their copulating glory but if it’s some kind of metaphor – and I’m not sure it is – it is tested to destruction in the show though maybe it provides a safe haven for when the action (or an actor) stalls. I would suggest a top and tail approach: get the laugh at the start, then save it till the denouement. It’s a personal view but overuse means familiarity and we know what familiarity breeds.

There were certainly some Pigeons fanciers in the audience and it’s an entertaining half-hour if you’re around Highbury Corner.

Under the watchful gaze of a pair of amorous pigeons, a park bench proves an unlikely venue for a pivotal meeting of minds between an elderly lady and a young man struggling with relationship issues and embracing his true self. Divided by a brace of generations and life choices, the random passing strangers nonetheless bridge the technological and misconceived divide and prosper from each other’s wisdom, proving that good ol’ fashioned face to face conversation and social media need not be antagonists, and that we’re never too old or young to learn from each other about what it is to be human.