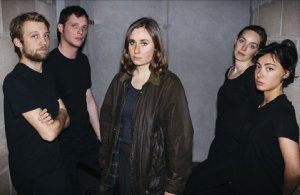 It is currently a work in progress with an international cast of five talented actors grappling with the raw stages of combining physical theatre and verbose exchanges to energise the repeated arguments that dominate the piece, such as feelings of superiority and repercussions for our actions.

The characters in Raskolnikova enjoy overly long debates on the rights and privileges bestowed on those who are deemed ordinary in society versus its extraordinary members, who, by the virtue of their extraordinariness may earn the right to commit murder.

Although it is in its development stage, it did appear the cast were more comfortable with speech than with physical movement. This is not to say their inventiveness was not appreciated, especially when exploring the circumstances that influence Raskolnikova (Hana Kelly) – whose name is the title of the play – to commit murder. However, at an hour and a half, and with one intermission, the play is too long.

As it stands, the repeated comparisons between ordinary people vs extraordinary people deplete Raskolnikova’s energy and leave it spinning on itself, robbing it of its theatrical thrust. Stripping out some of the dialogue and running it straight through without an intermission would greatly improve its dramatic impact.

As a re-working of a classic novel, and with a dedicated cast, Raskolnikova shows great promise.

Raskolnikova
At the Actors Centre as part of the John Thaw Initiative
until 05 February
Tickets: £7 (£5 Conc.)
Directed by Fernando Skanassi
Written by David Gaitán
Presented by Teatro Nómada

A gripping re-imagining of a Russian classic
Is murder still an unthinkable crime if committed for the greater good of humanity? Raskolnikova, a young revolutionary suffering in poverty, sets out to answer this moral dilemma. The play sees fragments of her deteriorating psyche embodied by four chorus members. Raskolnikova explores language, culture and morality in a way that brings this classic Russian story into the 21st century.

The cast and crew hail from five different continents – The Americas, Africa, Europe, Asia and Australia, and this rich diversity allows us to explore and develop the play from new and interesting perspectives.

Teatro Nómada has in recent years become an internationally recognised theatre company that aims to bring Latin American theatre to audiences worldwide. Its latest production Juana Inés, recently had an international and European premiere at DespertaLab Festival in Barcelona receiving an ‘International Scenic Creation’ award in 2017.

This would be the European debut of David Gaitan’s Raskolnikova after being produced in México, Singapore and America.