Home » Reviews » Review of Brawn at the King’s Head Theatre 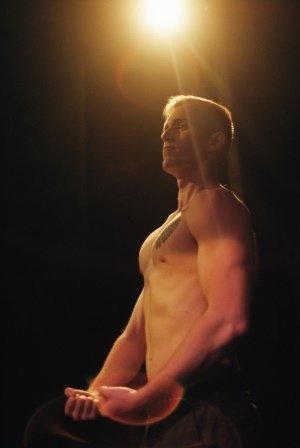 A chair, a set of dumbbells and a large water bottle are the only props for Brawn, a single-performer play, not so much about being ‘beach body ready’ but attaining the perfect body all the time. Ryan (Christopher Wollaton) is able to acknowledge that he hasn’t treated sort-of girlfriend Becky in the manner with which she deserves, particularly given her kindness and civility, but everything – and I mean everything – comes back to an unhealthy obsession with training to make himself look supposedly ever more attractive and better than all the rest.

A lot of ground is covered in this brief play, and I don’t just mean all the push-ups and other exercises that go on as the show progresses. At surface level, Ryan essentially has a first world problem, one at least partially created by first world entertainment, media and peer pressure – a number of Hollywood stars are name-dropped as examples of the sort of people who are admired by a good proportion of the general public. Ryan is certainly very confident in some regards, perhaps even a little arrogant, describing himself (amongst other things) as handsome, strong and intelligent.

But his intelligence doesn’t quite extend to having a balanced sense of perspective on life. Having decided against continuing a local gym membership, ostensibly because he couldn’t stand the other customers, he still has the advantage (or disadvantage, depending on your point of view) of still living with his parents, so has managed to persuade his father to have the garage converted into a gym. He has a part-time job, working as a general labourer in his father’s construction company, though even these hours have been curtailed, by Ryan’s own volition, because even earning money doing manual labour is unproductive in Ryan’s mind, relative to being in his own gym. Socialising, answering the phone (which for some reason buzzes incessantly in the closing moments of the show) – anything of any description is subservient to Ryan’s religion of self-worship.

According to Ryan’s philosophy, the only thing that women find appealing in a man is his physical attractiveness, even if he has no discernible personality or sense of humour – which is not so, because what anybody of any gender or sexual orientation looks for in a partner is far more complicated and can only be properly understood in context. In short, not everybody is obsessed with their bodies as Ryan is with his, and he doesn’t seem to see the wood for the trees when he asserts that he can’t spend any time whatsoever with his significant other because he’ll lose her if he doesn’t work non-stop to achieve a better body.

It’s all rather sad, really. In claiming he’s almost there – eighty percent, to be precise – in terms achieving his optimum physique, it becomes clear that he’ll never attain the other twenty, a bit like people who climb and climb the career ladder, irrespective of the cost to their personal lives, forever striving for a little bit more. The narrative suggests the root causes for what appears to be a manifestation of a mental health problem stem from schooldays, and sufficient detail is given as Ryan looks back on the past as to the sort of thing that might have led to where he is as a young adult.

Occasionally hostile, though only towards himself as he repeatedly gets frustrated at the limits of his own physical endurance, Wollaton’s Ryan has a remarkably engaging style, and this production is a useful reminder that the objectification of men can be just as damaging as the objectification of women. An open-ended conclusion leaves the audience wondering where Ryan ends up. There isn’t an overarching critical incident that overshadows everything and everyone else being spoken about in the play, which I found refreshing. Top marks, then, for an absorbing and passionate production. One could even say it packed quite a punch.

Brawn is a portal into the world of a young man named Ryan. A world that is spiralling out of control… Once a smart kid in the classroom, Ryan is trapped in a life he doesn’t want to lead. He feels increasingly suffocated in a world obsessed by self-image and measures his self-worth in muscle mass. Ryan spends every day in the gym, but what began as fitness-based self-improvement has has transformed into dangerous self-destruction. A raw, emotional and illuminating piece of theatre, Brawn explores the powerful desire for physical perfection, and the silent, anxious struggles of the men who experience it today.