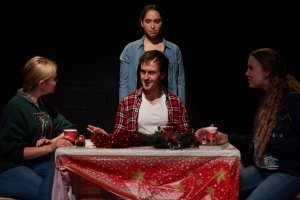 SevenArc Productions’ In Limbo, appearing at the Tristan Bates Theatre until 3rd August as part of the Camden Fringe Festival doesn’t credit a single playwright, noting that the play is ‘devised by the Company’. Director Georgie Straight is, however, credited by singular name and credit indeed should go to her for the excellent staging of this harrowing and pacey one-act.

The play’s opening image of a shivering James (played by Shaun Amos) is immediately compelling and his performance is powerful and committed. Likewise, Anna MacArthur (Isla), Beatrice Hyde (Sarah) and Catherine Boyle (Beth) all show dedication and focus to their roles with Boyle being exceptionally relatable as James’ girlfriend and Isla moving skilfully back and forth from a naturalistic portrayal to stylised performance as various dimensions of the ‘guide’. Straight’s use of storage boxes as James’ literal baggage offers a strong metaphor as well as a clever way of managing costume changes and scene shifts without wings and creates a powerful final image when we meet the story of James’ father.

This play, without question, is affecting and grapples with the important issue of suicide. However, this family drama – centred around James and his struggles – doesn’t fundamentally answer or even investigate the core question the creators pose: how suicide has become the most common cause of death for men aged 20-49 in the UK. We get an intimate look at the impact of James’ depression and anxiety on, as it happens, the women in his life (his sister and his girlfriend). We learn of his pressures with a disabled mother and a deceased by suicide father as well as his battle to belong as a bright and curious philosopher rising against the odds of his social class to win a place at Oxford – only to crash out a year later to humiliation and self-loathing. The intensely personal portrait of James comes across as specific to James. His intellect and academic achievement may symbolise chances won and squandered to unspeakable and soul-crushing shame more widely, but the audience has to reach and hypothesise to extrapolate James’ experience as providing reasons for a rising male suicide epidemic in the UK. Such a question is so powerful and so important that it’s frustrating not to see it dealt with. I wonder if the script had been devised by a single (or at least lead) author on such a mission, if she or he might have been able to explore the macro as well as the mircro?

The other frustration with this story is that we vividly witness the impact of James’ depression on his family but there is little insight into his interior world. There are moments when Isla’s seems to veer from almost an angel from It’s a Wonderful Life to James’ psyche. MacArthur is deft in switching personas but it’s confusing as to who/what she is actually supposed to be. The unfortunate impact of not getting better access to James’ inner struggles, through his own point-of-view, is that he doesn’t fundamentally come across as sympathetic. If the play wants to about the impact of a young man’s suicidal depression on women trying to hold it together, there are germs of a theme to develop. However, given the clear thesis set out is, instead: why such a tragedy is increasing amongst British young men, we are deprived of its true consideration.

When James finds himself in Limbo after taking his own life, he is met by a guide who helps him to confront his past. Set in an imagined world, the pair re-visit key moments of his life.
What brought him here? What has he left behind?

In Limbo explores the pressures we face in modern society in a relatable, touching and poignantly funny way. Inspired by real experiences, it investigates how suicide has become the most common cause of death for men aged 20-49 in the UK and the power of human connection.