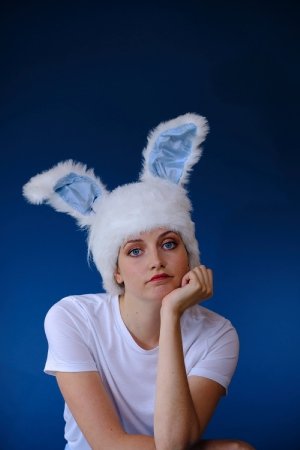 Shippy, incidentally, is played, endearingly, by an unsuspecting bloke in the audience and it’s part of the charm of Nicola Wren (née Martin – yeah, keep up and join the dots) that through all her ranting, all her raging, all her self-deprecating ego-flagellation there is a certain amount of pathos that is never sentimentalised. Wren is funny, and irreverent (mainly about sibling superstars) and tirelessly physical with one of those sharp tongues via soft delivery that shows she knows how to engage us, and play us, and pack us in her doggy bag so she can reheat us and chew on us later.

Wren has clearly honed to near perfection her one-person diatribe against a wannabe superstar’s life, at the Edinburgh Fringe, and the result is a highly accomplished anecdoterarge that, through the smooth and polished enunciation – though sometimes at the speed of sound – retains the feeling that this is the first time she’s done this, and we’re the first audience to blessed with her self-mocking wit, that she really appreciates being able to invite us all, individually, into her world and she’d like to share a pizza with us afterwards. All in all, it’s an adventure of a lifetime.

The show is written by Wren and it’s a cleverly constructed script, clearly very personal but decorated throughout with pacy humour and a bunch of throw-away one line zingers that keep the audience on the edge of their padded bleachers and tell us that Wren knows her way around the printer ink as well as the dramaturg’s manual on form and structure. She starts off by channelling her inner Woody Allen by borrowing the talking sperm from Everything You Always Wanted to Know About Sex* But were Afraid To Ask which provides a punchy, spunky start to the show and she uses her trusty costume rail to good effect as she switches from one life-defining embarrassment to the next in her quest to find questions to fit the answers that fate has laughingly dealt her. She’s cajoled throughout by Director Sadie Spencer who has pushed her to the limits of movement and spatial awareness – an essential in a one-person show and always the hardest part – and she gets amusing off-stage prompting from Sound Designer Beth Duke who provides some carefully scripted unscripted asides.

I have to say that on a cold, miserable, rainy day in Borough High Street there is no better antidote than something just like this show. There are some cool lighting effects, too, by Jack Weir, which give the show a kind of everglow atmosphere.

Wren is a ball of energy, an ebullient raconteur and a natural entertainer. She gives her siblings stick, she gives her parents stick, she gives herself stick and, one way and another, she gives the audience stick as well. But the
audience love it and they love her and they give her the kind of love that, she seems to suggest, she might not have got from her family. She’s feels totally at home here in the Southwark Playhouse – in any playhouse one imagines – and many more audiences around the country deserve to be hypnotised by Wren’s charm and wit – hopefully she’s taking the show on the road. Though I’ll be eager to see her next project as she expands her horizons away from her life in technicolor. Such a magic experience – do go and see it.

I will now consciously uncouple myself from Nicola Wren and my laptop and get Spotify to play me a Coldplay track or two just to see what I’ve been missing all these years.

Nicola knew from very early on that if she wanted her four siblings’ approval then she would need to impress them, so she set out to become a superstar.

But what happens when one of her siblings genuinely does become a superstar? With Chris Martin of Coldplay fame as her older brother, how long can she fight to stay out of his shadow? How can she to prove to her siblings, the world and, eventually, herself, that she is enough in her own right?

Fresh from a sell-out run at the Edinburgh Festival Fringe 2019, Superstar is the heart-warming, hilarious and honest story of Nicola Wren’s desperate attempt to stand out in a family of big characters.

A true story and joyful celebration of coming to terms with you are.