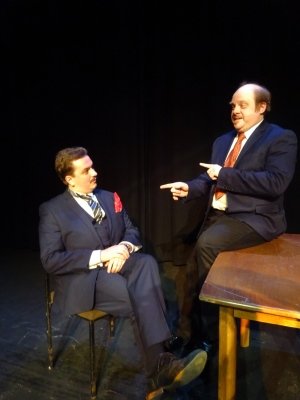 John Mortimer’s two-hander is a classic of the genre – the genre being plays set within a legal framework: Twelve Angry Men by Reginald Rose (1964) comes to mind as does Terrance Rattigan’s The Winslow Boy (1946), as well as David Hare’s Murmuring Judges (1991). Mortimer was a lawyer by trade but after the success of The Dock Brief – originally a radio play – he went on to pen the popular Rumpole of the Bailey, commissioned by the BBC as a Play For Today before being developed as a series for Thames Television with Leo McKern in the title role. Mortimer wrote many other plays including the highly successful A Voyage Round My Father (1979) with Alec Guinness taking the lead role when it transferred to the Theatre Royal, Haymarket.

In this production at the iconic and versatile Cockpit Theatre, we have two actors on the top of their game, displaying mesmeric teamwork and scintillating interplay as they bring Mortimer’s funny, intricate and demonstrably authentic play to life. We’ve all met Herbert Fowle. He’s an entirely unassuming alleged wife murderer who is not as simple as he appears and generally seems to be revelling in his role as high-security
inmate and possible candidate for death row. I imagine Kingsley Glover has been waiting all his acting career for this particular role to come his way and he grabs the opportunity with both hands, both feet and his full range of quirky character impersonations that he has had stashed away for that inevitable rainy day. Fowle, who is a budgie fancier and long-suffering lame-Christmas-cracker-gag tolerator, is so joke-over that the only way out of his irritable-wife-humour syndrome, he comes to believe, is the fatal dispatching of his marital tormentor. Allegedly.

Glover plays Fowle to a T and easily coaxes us into believing his entire implausible plausibility whilst his dead-pan responses and bemused asides have us giggling away throughout the show.

He is ably assisted, cajoled and courteously goaded by his Barrister, Wilfred Morgenhall, played with delectable decorum and unbridled misplaced enthusiasm by Matthew Vernon. A dock brief is a legal brief handed to a
court-appointed barrister for an unrepresented accused person who is literally “in the dock”. Morgenhall has been waiting his entire professional career for a chance, for the chance, for the opportunity to show that he is actually a top-drawer lawyer who can wrap prosecutor, judge and jury round his little finger with ease through dint of his stupefying legalistic borderline jiggery-pokery.

Vernon is brilliant at this, convincing us that he’s really good whilst simultaneously showing that he doesn’t really have a clue as he gets Fowle to role-play the significant components of a court in an attempt to prove that he can be found not guilty, whilst actually trying to convince himself that he has the tools to properly defend Fowle and actually prove him innocent before the law. Glover gives us wife, lodger, witnesses, judge and jury, running the whole gamut of amusingly convincing characterisations whilst Vernon orchestrates the charade like an increasingly demented conductor who’s misplaced the beat early on and can’t ever seem to get it back again. The reciprocity between Vernon and Glover in these mock trial sequences is exquisite and their teamwork is the bedrock that makes this show an exhilarating success.

They are ably directed by David Tudor who not only knows his way around a stage but also seems to have an intricate knowledge of the courts, their processes and their choreography – hopefully, this stems from observation
rather than experience. Space on the Cockpit’s thrust stage is used cleverly and effectively and Tudor ensures that there is not a line thrown away, or a glance wasted or a move that doesn’t enhance the action. Mortimer’s script is beautifully written with the maze-like details of the law made plain and simple for a lay audience and this team ensures that it is performed to near perfection.

The plot is simple as the barrister is given his first case in 40 years and chosen to defend the henpecked husband who has murdered his over-bearing wife because she wouldn’t leave him.

In a cell beneath the Old Bailey, the two men meet. One is Wilfred Morgenhall, the unmarried barrister who never gets any cases and is overjoyed to have won this dock brief, the defence of an accused individual with no lawyer (at public expense). The other is his client Herbert Fowle, an insignificant man who just wants to plead guilty to murdering his wife and get it all over.

Flashbacks show that the wife was impossible to live with and Fowle, who avoided her as much as possible, hatched a plot to get rid of her by taking in a male lodger. The lodger found her amusing and attractive, until one day he went too far and Mrs Fowle threw him out of the house. In despair at his plot having failed, Fowle killed her.

Morgenhall’s role plays various defences, in the process raising Fowle’s will to fight. But when the case is called, he botches it and Fowle is found guilty. Morgenhall goes to visit him in prison, where he learns that Fowle has been reprieved because his defence was so poor…