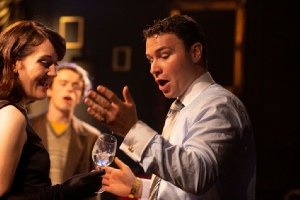 It’s Thanksgiving 1983 in Washington and the Pascal family are preparing for the holiday. Jackie-O is overly excited by the fact that her twin brother Marty is coming home for the occasion. When he arrives having driven through a hurricane, he brings with him Lesly, his fiancée and Jackie-O is apoplectic for The House Of Yes is a dark tale of incest, jealousy and a very dysfunctional family!

Written by Wendy MacLeod the play (which was filmed in 1997 starring Parker Posey) takes place over one night as the family’s traits and morality are peeled away like the layers of an onion. To start with there’s Jackie-O which isn’t her real name, but she’s obsessed by Jackie Onassis at the time when her then husband John F Kennedy was assassinated. Also, in the house is her Mother who spends the evening swanning around, possibly high on pills. Marty seems to be the only normal member of the family but his love for his sister is more than just brotherly love. The third sibling is Anthony who’s just plain weird and a bit of a pervert. Lesly who’s the only outsider soon comes to realise what she’s got herself into and it’s not good.

The play starts out as a comedy of manners with false politeness between the characters and pulls the audience into thinking it’s an American drawing room comedy but as events unfold, it soon becomes obvious that we’ve been lured into a false sense of security. Jackie-O is decidedly nuts and survives on medication to keep her insanity in check – well almost. Marty loves Lesly but he loves Jackie-O even more and they live out their fantasy with Jackie-O dressed in a facsimile of the outfit the real Jackie-O was wearing the day of the assassination, complete with blood stains and dried pasta representing the dying President’s brains! Originally used for a Halloween party, it’s now part of the couple’s sexual ritual as Marty plays the part of JFK.

The problem with this so called “black comedy” is that whilst it certainly is black, it just isn’t that funny. The plot is ludicrous and contrived and the characters (apart from Lesly) are just nasty so there’s no empathy for any of them and towards the end, I was hoping the hurricane would blow them all away. There were echoes of Tennessee Williams in the writing, but they were very faint, and it lacked his well-drawn characters.

The performances of the cast of five were all a little hysterical and over the top with very little light and shade and it made the eighty minutes or so of the play’s duration, seem so much longer. However, Rachel Ryan’s set design is wonderful. Using lots of empty picture frames on the walls possibly to symbolize the emptiness of the family’s lives, with lots of gold drapery to denote faded opulence. The small space and the furniture in it, added to the claustrophobic existence of the characters.

I’m a big fan of Matthew Parker the outgoing Artistic Director at The Hope and director of this play. Earlier this year his direction of Thrill Me – The Leopold And Loeb musical got 5* reviews (including one from this reviewer) and a number of Offie nominations. His work during the time he’s been at The Hope has garnered a number of much deserved awards and a growing reputation for excellence in one of the smallest theatres in London. It’s a shame that Matthew’s last work at The Hope before he moves to pastures new, disappointed this reviewer who’s a big fan.

Just what happens when you grow up in a house that only says “yes”?

Meet the Pascals. A family living in the shadow of the Kennedy clan. Outside their Washington D.C. home a hurricane is raging. Inside, at the eye of the storm, a series of twisted and dangerous events have been set in motion that can only have one destination.

It’s Thanksgiving, 1983. Jackie-O is beyond excited to have her twin brother Marty home. He’s excited too, but for different reasons. He’s bringing home his fiancée to meet the family. Younger brother Anthony is impressed, perhaps worryingly so, and mother Pascal is too zoned out on pills to be paying much attention to anything. The scene is set for an evening of twisted machinations and mind-games that will leave the players with scars that will never ever heal.