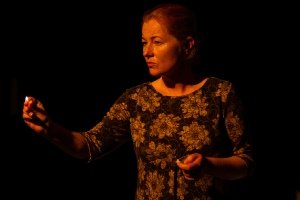 I recall the late Cilla Black being interviewed by Sir Michael Parkinson on his television chat show – amongst the many points of discussion was a burglary, after which the Blind Date presenter discovered some irreplaceable items of sentimental value had been taken. Her response, almost certainly against police advice, was to leave her front and back doors wide open the following night – it’s just things, let them have the rest. She felt it was adding insult to injury that nobody even entered let alone took anything.

I wonder what Sal (Angela Marray) would make of such conduct. In The Match Box, an intense and harrowing piece of theatre nonetheless delivered at a steady pace, the sole on-stage character wants to do things her way, even if that means going against conventional wisdom. As someone who had a religious upbringing, there was much I could relate to as far as Sal’s dealings with her parents went. The irony was not lost on me as her mother sternly encouraged Catholic values only for her father to berate her (Sal) for a public display of forgiveness.

The sound effects (Jon McLeod) in the show did not detract from the monologue, and – thank goodness – allowed the script to shine. Equally impactful were some subtle but effective lighting changes (Amy Daniels) to reflect the mood of various scenes. Here, few props are required, and they are shifted around from time to time. The staging suggested (at least to me) that this was Sal’s back garden – the more salient point, it seems, is that she has returned to Ireland having spent some years in England. But because her local community is fairly remote and has next to no activity, striking matches and letting them burn out has become an acceptable pastime for Sal.

It’s hardly unheard of for one performer to take to the stage for an hour, as punters at the Edinburgh Fringe will be well aware. But for just over two (interval included), Marray’s Sal takes the audience on a journey that starts gently enough in a way that justifies the play’s title and goes through, in a word, tragedy. The context of what happens is fully explained, and is sadly relatable for London audiences, aware of innocent victims of criminal activity. What is particularly interesting here is Sal’s response (and those of others around her).

The stripped back approach this production takes relies heavily on old-fashioned storytelling – a note in the show’s programme claims storytelling “pre-exists organised agriculture by many thousands of years”. I have often noted how single-performer shows are, almost by definition, single-perspective stories, and therefore it may have been beneficial to hear versions of events from others.

Sal, however, portrays others without being preachy, and I certainly didn’t get the feeling she was an unreliable narrator. Others may beg to differ, not least because (at the risk of giving too much away) she admits she has ‘conversations’ (inverted commas mine) with lambs. There are moments when I wondered where this story was going, but just when her calm and stoic nature seemed as though it would be relentless, an outburst of emotion, be it anger, grief or something else, adds another layer to this increasingly gritty plot.

It is for other plays in other places to rage against the criminal justice system (or, as some call it, the criminal injustice system). There are plenty of other things to be displeased with here, and the beauty of theatre, as ever, lasts up to the curtain call, when Marray takes a bow, and the audience applauds and appreciates what was a very deep and thought-provoking production.

A breath-taking story of love, hate and the desire for revenge, written by one of the greatest Irish playwrights of all time.
And she grew to be a girl, my daughter, my Mary. Sing a song, Mary. Sing a song for Grandma and Granda.
The ties that bind us can never be broken and a potent flame burns in the heart of a mother. Why is Londoner Sal hiding out in a remote Irish island? She must face her demons alone and her tale begs only one question: what would you be prepared to do for the ones you love?
Strange Fish are a London based Irish theatre company whose mission is to bring the best of Irish theatre to the U.K. This play focuses on a mother whose child has been killed on the way home from school. With deaths from knife and gun crime reaching crisis levels in London, the company feel this production couldn’t be timelier.