You are here: Home / Reviews / Play / The Strange Case of Jekyll & Hyde at the Brockley Jack Studio Theatre 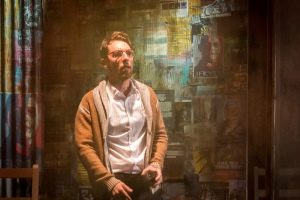 “The object of power is power.” Set in the (very) near future – specifically, the months leading up to the November 2020 United States Presidential election – this is a production that might, at face value, be yet another show telling audiences what they already know. As a director’s note in the programme acknowledges, there are quite enough shows about That Referendum already (take, for instance, Edinburgh Fringe 2019’s Brexit, Pursued By A Bear, the follow-up to Fringe 2018’s Brexit Through The Gift Shop), so this adaptation of the Robert Louis Stephenson story, having been set in modern Britain in an earlier draft, is instead set in the USA.

The play seeks to examine what may happen once the Trump Administration is over. I can’t determine whether events, as portrayed in this production, are predictable or not: there are many in the entertainment industry that are left-leaning, and will, therefore, identify with the positive soundbites of Henry Jekyll (Will Pinchin), a city mayor, whose big set speeches are (at least to me) a cross between Obama and Kennedy. There’s more than a whiff of ‘shoot for the stars’ in his proposals, which include a specific commitment to take guns off people, though how this will work in practice isn’t elaborated on. The play feels, however, a little too assured that President Trump will be defeated at the polls in November 2020. But if he was voted in once, it is entirely possible that he could be voted in again.

Edward Hyde (Christopher Tester) is a schoolteacher, an upstanding contributor to society at the start of the play and the evil persona of the novel at the end. Some characters from Stephenson’s novella are played by women in this production – Gabriel Utterson the lawyer is now Gabrielle Utterson (Lucy Ioannou), an investigative reporter, and Dr Hastie Lanyon is now Hayley Lanyon (Charlie Ryall), who works in a scientific research laboratory. The most intriguing alteration is that of Mr Poole, Jekyll’s butler, who is now Imogen Poole (Gabrielle Nellis-Pain), who I took to be an escort: Utterson is one of her clients.

The contemporary setting, periodically underlined by cultural references to things like the Harry Potter and Hunger Games books and the Black Lives Matter movement, is distinctly far removed from the Victorian era, though the production tries hard to create a somewhat eerie and spooky atmosphere, with mixed results. Background sounds such as low-level rumbling sometimes permeate the dialogue, which recalled to my mind television shows like The Great British Bake Off, where the music swells whenever there is supposed to be a dramatic moment. Here, though, the script is strong enough to hold its own without such embellishments, and it is telling that some of the most engaging moments in the play involve no background sounds at all.

The production is not afraid to use flashback scenes, mostly to ‘four years earlier’, indicative of both a pivotal period in the relationship between Jekyll and Hyde and, of course, the previous presidential campaigns. The time-hopping doesn’t make the show unnecessarily complicated, even if there is a whiff of ‘Previously… on Jekyll & Hyde’ as scenes are repeated for narrative emphasis. There is good use of video projections, and the lighting (Anna Reddyhoff) is often effective.

The play makes some interesting observations about current socio-political issues – Jekyll ponders, for instance, on the actual impact either way of “thoughts and prayers” in the aftermath of yet another shooting. There’s a lot to ponder on after seeing this thoughtful and perceptive production where indeed, as writer and director Ross McGregor puts it in the show’s programme, “all secrets are told, all truths are found, and a final, dreadful reckoning will take place”.

George Orwell
2020. The President Of The United States has fallen, impeached for corruption and now awaits trial. As the American senate slides into chaos, election fever grips the nation. In the wake of yet another mass shooting, Senator Henry Jekyll, a bold, young, liberal announces his candidacy to run for the Oval Office. His one promise: to end America’s toxic love affair with guns. Emboldened by a landmark level of public support, Jekyll’s victory seems almost inevitable.

However, as Voting Day draws ever nearer, Gabrielle Utterson, Jekyll’s campaign manager grows increasingly suspicious of her senator’s running mate – Mister Edward Hyde. As the rumours and accusations multiply, Utterson must race to uncover exactly what power Hyde holds over Jekyll – before he becomes just one heartbeat away from the most powerful man in the free world.

Thirteen-time Off West End Award-Nominated Arrows & Traps Theatre bring their critically-acclaimed modern twist to Robert Louis Stevenson’s iconic gothic classic, reimagining it as a gripping political thriller set in the halls of American power. The performances at the Jack mark the start of a national tour.