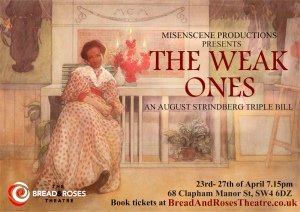 When you have ten actors in three separate one-act plays with multiple roles and a plethora of Amelies, Anettes, Helenes and Adeles then one would have thought that, for any self-respecting theatre company, a programme – even if it’s merely one side of a computer-printed sheet – would be a prerequisite. But for Misenscene Productions, not so much it seems. I enquired of the usher if there was a programme of any sort and, after perusing me as if I was some rabid critic from the outer echelons of deep space, he pronounced, darkly, “No programme!”. So forgive me if this review is a little short on specifics and detail.

The three plays in question form a triple bill of August Strindberg’s shorts. Strindberg’s personal, experimental and naturalistic style of drama is challenging for any company and requires knowledge, depth of understanding
and a total immersive empathy for his poetic language. Sadly all these elements are missing from Misenscene’s production.

Starting with Motherly Love (1892), directed by Rebecca Tenor, this opener was clearly not ready, despite being the second night. All the actors stumbled over their lines, there were some seriously uncomfortable pauses, it was static to the point of being almost moribund and any thought of imparting the intimate scandal embedded in Strindberg’s searing script was lost in the headlong rush to simply recite the lines. Disappointing, to say the least.

The Stronger (1889), directed by Alicia Colak is a dramatic monologue where Miss X berates Miss Y for seducing her husband. Stripped bare of any real passion or emotion, rather than “dramatic” the monologue ranges from a vaguely neurotic low-key rant to an irritating mumble-dirge: audibility was a constant problem throughout the show which should demonstrably never be the case from professional actors in the intimacy of the bijou Bread and Roses Theatre. Miss Y is silent apart from an excruciating several minute-long forced laugh that sounded like the cackle of an inebriated Weird Sister and requires serious attention.

The third section is Facing Death (1892), directed by Victor Majorin, which combines neurotic narcissism, penury and suicide in a kind of collection of Strindberg’s greatest thematic hits. Simon Bass plays the dour, depressed, deluded debtor and wannabe pyro-maniac Durand. He has three daughters and owns a failing boarding-house which his eldest, Adele, runs for him. OK, this is a depressing scenario and Durand is a depressed and depressing guy, but please, give us some spark, some life, some personality before we all go out and slit our wrists – because of the acting, not the themes. At least, in Karen Olrich-White as Adele (somewhat retrieving her Weird Sister act), we have a little class bestowed on the proceedings as we have an actor who seems to get the script and understand the poetry of the lines. She’s not given much help though and she must have the thought that she is plying her trade in a vacuum.

Back to that non-existent programme: they could, of course, have just printed off the rather scanty press release and handed it out so that punters – who in all probability hadn’t seen it – got something for their ten quid plus providing a little help for poor, beleaguered reviewers.

The Weak Ones are three one-act plays by August Strindberg, the author of Miss Julie, set against the backdrop of 19th-century swedish everyday life.

Motherly Love – A Daughter and her overbearing mother spend their summer holiday in the Archipelago. For the first time the daughter is making friends, but can she face leaving her mother behind?

The Stronger – Two actresses meet at a cafe on Christmas Eve. One keeps quiet as secrets are revealed. Who is the Stronger?

Facing Death – An hotel proprietor stands on the brink of bankruptcy. With three daughters to provide for he sees only one way out.

The Weak Ones
by August Strindberg, directed by Rebecca Tenor, Victor Majorin & Alicia Colak
23rd to 27th April 2019, Tuesday to Saturday at 7.15pm