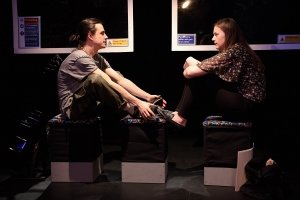 The irony was not lost on those of us already seated as others had to slot themselves in a venue with unreserved seating: an ever-increasingly crowded room full of people about to watch a piece of theatre called Tube. And so we all duly moved right down and made use of all available space. Now, the longest delay on the London Underground I’ve experienced, as far as I can recall, was 70 minutes, in the heat of summer, in the days when the Circle line actually did go round and round but also in the days before the Circle line had air conditioning.

Here, Rachel (Michaela Carberry), on her way to a job interview, and an actor-musician known only as The Man (George Damms) find themselves stuck on a deep level Tube line for considerably longer than that. Quite how long – aside from giving too much away – is hard to ascertain in the end, at least partly because that stops being a salient point in a broad narrative about what really counts in life.

The setup is credible enough – forced into spending time in a confined space with neither mobile telephone signal nor WiFi, the pair strike up a conversation, having never met before: and no, there are no revelatory stories about how they actually have met before years ago after all. If the production feels slightly overlong (at 75 minutes, it’s not exactly exhausting) this is merely indicative of how successful Joe Kerry’s script is at portraying these characters as people who are unsure of how long they will be in each other’s company for. Therefore, it is difficult to work out if there is much point in further discussion of – well, anything.

Both characters are gregarious in their own ways. The usual Tube etiquette of non-interaction might well have prevailed in real life, even in a prolonged delay (that is, little or no interaction of any kind) – but that simply doesn’t make good theatre. The audience discovers much about the duo, without getting to know the characters themselves in too much detail: as they periodically remind one another, they have only just met. The ending came across as rather sudden and unexplainably out of character – having given it some thought, I can only conclude there was a rash act, a fit of irrationality.

Those who have seen the play, mind you, might think it rather flippant of me to describe a crime against the person as irrational. But Rachel and The Man’s respective states of mind deteriorate the longer they are ‘being held’. There are also some songs to enjoy (or endure, depending on one’s tastes), and it naturally follows that the duo’s individual preferences seldom align. Things get raw and poignant from time to time, and while there’s a need to withstand the sheer banality of, say, choosing a favourite film, attention must be paid to what isn’t said as well as what is.

A jarring but plausible mix of the sublime and the ridiculous come together in this engaging production, ably acted by a dynamic and surprisingly (given the setting) energetic cast.

tube follows two strangers who find themselves alone in an empty carriage when the train stops in a tunnel and doesn’t move again. It explores their relationship in this less than ideal situation, as they find comfort and strain in each other.

This unique piece gives you an honest look into the emotional and physical impact people can have on each other, and the lengths they will go to for the ones they love. The play uses hyper-realism, which links a myriad of styles together, whilst ultimately being supported by a backbone of naturalistic text.

tube began its life in 2018 where it was work-shopped with support from the Southwark Playhouse. It went on to win the Stockwell Playhouse Bursary Prize For Writing and had a short run in October 2018 to grow the piece further. The piece lands at the Lion & Unicorn Theatre for 2020 and continues its on-going development by Colour & Light Productions.