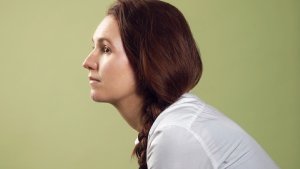 I remember working in a service job. I was 16, and took orders, ripped tickets and cleaned up trash left behind by cinemagoers in a suburban Sydney Westfield. Work Bitch is the story of a waitress who never thought she’d still be waiting tables at 32, and touches on experiences I and many others will have had. It’s the story many of us will recognise, feelings many of us will have encountered in doing less than satisfying work – work we do merely to be paid.

Customer-facing jobs are not that easy. The anguish associated with the slow dripping of time and repetitive tasks is poignantly explored in this show written and performed by Jessica Siân.

The show covers a lot of ground; Siân has woven a series of stories of the slow passing of years, the small acts of disrespect and degrading confidence, throughout this performance. It asks the question: what does work really
mean? What is the value of a working life? How does a job affect the self?

There isn’t a lot of support from the set itself, and Sian’s performance is understated. The weight of the show rests very much on the writing itself. And there’s much to say on this front.

Sian has imbued the show with a variety of really touching, relatable and human moments. There are many laugh out loud lines, delivered beautifully. Her initial nerves were visible, and there were fluffed lines and moments where I felt a little like we may have lost our way. Part of this is due to the structure of the show – we are introduced first to a woman who seems to be a central character, but isn’t. This made me think we were in for a very different show than the one we saw.

We move from South African politics and racial dynamics to London, and while the travel makes sense, the entire vibe of the South African section is lost once we reach London. Racial dynamics fade and concerns move on. Themes feel as though they are left aside, not seen through to completion.

We aren’t given much of a clue about where it is all going; the show is much more stream-of-consciousness in that sense, moving from one memory to another. And while this isn’t a bad thing (in fact, it is charming in its own way), a clue about the trajectory of the piece would help tighten things up, aiding cohesion overall.

There are a lot of characters and they zoom past us. Some are incredibly touching – ‘Emily’ for instance is memorable because she is given real warmth, real life. Others, however, are quickly forgotten. Some are completely underutilised. In particular, the mention of her father is kept to a minimum. And yet, he is described as a man who has failed to hold down a steady job for much of his life, much like the waitress who jumps from job to job without direction. Yet, this opportunity for reflection and subtext is not really utilised.

Instead, an uncle character is introduced as a source of introspection – these characters serve the same purpose, and neither is fleshed out quite enough. The subtext would have been enough without added memories and details to justify the back and forth between South Africa and London; we didn’t require those added details and backstory to justify the uncle character’s inclusion. It is, after all, only an hour show.

Despite these issues, Siân has written some killer lines and sprinkled the piece with moments of real heart. There is so much to relate to and empathise with. With a tightening of the structure, digging into the supporting characters a little further, Work Bitch would be a near perfect show.

Waitress never thought she’d end up here, 32, clearing plates, taking orders. How did she get here? And what if this is it?

A story of pulling pints and sweeping floors – from a Saturday job refilling coffee cups in South Africa’s young rainbow-nation to a curry house in Camberwell nearly two decades later, we follow Waitress through a life well worked. The lovers, the friends, the adopted families and the terrible tips that made her.

This play is for generation side-hustle. The three jobs and shared flats and no property prospects. Work Bitch is a play about the work we do and how it defines us.
What do we really value? And are we working at it?