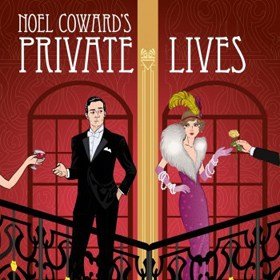 Upon entering the Mercury auditorium, I’m struck by the simple elegance of Sara Perks’ design, complemented by Richard Godin’s lighting. Long, flowing fabrics create the balcony overlooking the French coast, offering the chance for a quick, smooth transition between Deauvillian hotel and Parisian apartment. This really helps the pace for a play that often feels like it has an early interval.

Esther Richardson’s energetic staging keeps the cast on its toes and the four main players, with the welcome addition of a hilarious Louise (Christine Absalom), thrive. Though occasionally a little shouty for my tastes, the interplaying between the two couples is well-rehearsed and makes best use of Coward’s dry, sometimes even catty, dialogue.

Pete Ashmore’s Elyot is fantastically petty, with great comic timing, whilst Olivia Onyehara revels in the melodrama of her young, but not uncultured Sybil. Robin Kingsland as Victor is the most balanced of the cast, somewhat more restrained but suitably blustery when required.

Krissi Bohn, of Coronation Street fame, drives the pace with vigour as the unpredictable Amanda, equal parts sweet and sharp. The colour-blind casting of this play doesn’t add much thematically but is interesting as a follow-up to the Mercury’s production of Clybourne Park a few weeks back as they continue to explore the dynamics between race and class through this Made in Colchester season. I would much like to see this production follow its predecessor on tour for it’s a solid production with a stellar cast.

Glamorous divorcees Amanda and Elyot haven’t seen each other in years. So when they find themselves honeymooning with their new spouses at the same time at the same French hotel in adjacent suites, they can’t believe it.

EverAfter, A mixed up fairy tale at the Chickenshed Theatre, is a great Christmas show. As the title suggests, this is a concoction of stories. The … END_OF_DOCUMENT_TOKEN_TO_BE_REPLACED

The thing about Panto is not to over-think it. It’s about having fun and surrendering to the Christmas spirit. Like Christmas crackers, there is a … END_OF_DOCUMENT_TOKEN_TO_BE_REPLACED

Anyone who's worked in investment banking knows it's largely an intellectually-free zone, polluted with people who calculate each other's value … END_OF_DOCUMENT_TOKEN_TO_BE_REPLACED

By the production’s own admission, the version of events as detailed in Bonny & Read is unlikely to equate to an exactly full and fair account of … END_OF_DOCUMENT_TOKEN_TO_BE_REPLACED