There’s an air of familiarity around Restless in a story that feels as though it has been told before. In this period play, doctors like Tristan (Tom Rouvray) still visited people at home (unlike today’s system, which somehow assumes people get ill by appointment). I’m not sure whether Jonathan (Robert Bingham) only had the one servant, Grace (Sarah Robinson) for the sake of narrative simplicity: the household might have been large and wealthy enough to sustain a whole team of people – footmen, maids, gardeners and so on. After all, why would Jonathan, or ‘Mr Ogilvy’, as he insisted on being addressed, particularly by those he didn’t care much for, insist on such formalities, and make a point of saying he is the head of the household? 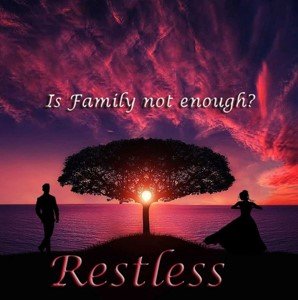 The household’s headcount has been reduced thanks to a family tragedy of some sort. The play doesn’t stipulate precisely what happened: all that is known is that Jonathan and his sister Angela (Marie Drisch) are now without their father, who they both speak fondly of. Jonathan is prone to channelling his emotions in the form of anger – his all too frequent temper tantrums made the character rather one-dimensional. A late apparent change of heart was short-lived, and in an era when one could be jailed for not being able to pay one’s debts, he finds his carefree lifestyle cannot continue, even if his petulance is eternal.

Jumping to conclusions and unwilling to listen to anyone else’s version of events, Jonathan sets about destroying Tristan’s reputation with sustained determination, but in doing so, puts a stain on Angela’s character, and by implication, his own. In a nutshell, he shoots himself in the foot. But neither Tristan nor Angela are entirely blameless, which makes the story more complicated than it looks at face value, and in the end, makes for an interesting plot.

Jonathan seems to care more for the welfare of an off-stage character than he does for his own sister. Both siblings indulge in escapism. He does it by hanging out with friends and spending money he doesn’t have, while she prefers the make-believe worlds of fiction books. But extrapolating the tidy and ordered world of fiction into the big bad real world has implications that Angela naively doesn’t realise until the permanence of them becomes clear to her. I might have called this a coming of age story, save for some ambiguity as to whether they actually do come out the other side of their experiences older and wiser.

The production is briskly paced but not so much as to come across as rushed – there isn’t, alas, a metaphor for the show in a scene where Grace struggles to keep pace with Angela. The cups, saucers and cutlery, together with the clipped tones, give more of an air of this production being set at least a century ago than the costumes did (though to be fair, it’s not like anyone was dressed in a jacket with The North Face logo on it). The play credibly makes plain the kind of restrictions that could be placed on a woman at the time, even one from a household far removed from the workhouses. A glimmer of hope, however, is evident as the play draws to a close, and there is scope for a sequel in which these characters’ stories could be developed further. A curious and intriguing production.

The pressures from expectations can be overwhelming. None know this better than the Ogilvey siblings: Angela, a young lady who loses herself in storybooks, and Jonathan, the new head of the family, plagued by growing gambling debts and self-doubt.
A chance encounter with the new doctor, Tristan, however, brings new meaning to Angela’s existence. But will this meeting be as innocent as it appears, or will it threaten to tear a family apart?
After all, life is not as simple as story book.

Britain, so a London cab driver once told me, is obsessed with the Second World War, as though it happened just recently. Power Luncheon would seem, … END_OF_DOCUMENT_TOKEN_TO_BE_REPLACED

William J Dunleavy, author and star of this monologue play, is a writer and face to watch. He enters the room (as the staging is more geared towards … END_OF_DOCUMENT_TOKEN_TO_BE_REPLACED

Cirque du Soleil’s Luzia is a joyful whirl through a psychedelic Mexico, which reminds us why live theatre is so special. Anyone who goes to … END_OF_DOCUMENT_TOKEN_TO_BE_REPLACED

I am always very excited to come across a new theatre, and Esher Theatre is a real ‘find’, conveniently situated near to Esher High Street and right … END_OF_DOCUMENT_TOKEN_TO_BE_REPLACED

Cecil Sharp is no unsung hero. Without the energy of this driven and at times prickly musician, the traditional folksong of rural England would very … END_OF_DOCUMENT_TOKEN_TO_BE_REPLACED