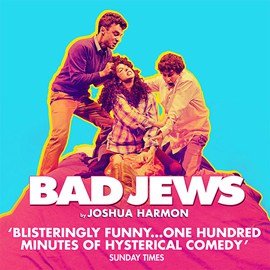 Bad Jews is a hilarious play written by Josh Harmon exposing the tensions when three members of a Jewish family are forced to spend a night together in a cramped New York apartment following the death of “Poppy” their Holocaust survivor grandfather and most “important family member”.

A beloved grandfather has died and a treasured family heirloom with religious significance is up for grabs. But who is most deserving of it? Bossy, overbearing, fanatically religious Daphna? Her wealthy cousin Liam who’s just returned from skiing with his non-Jewish girlfriend, Melody? Or Jonah, his brother, who would prefer not to get involved in the fight.

Jonah (Jos Slovick) is the youngest and most laid back; Daphna (Ailsa Joy) is razor tongued and orthodox, planning to move to Israel and join the army once she graduates. Liam (Ilan Goodman) is the most uptight, with Melody (Antonia Kinlay), Liam’s all-American girlfriend also thrown into the mix.

The four strong cast have good chemistry and work well together. Ailsa Joy has great comic timing as the sharp tongued, Daphna whilst Ilan Goodman’s Liam who gives as good as he gets. The pair go to war, both verbally and physically, over Poppy’s “Chai” (a medallion bearing the Hebrew words for life) which had survived Poppy’s childhood and the Holocaust. The whole scenario is a recipe for disaster with Daphna and Liam battling for tradition and heritage, these Joy and Goodman are ably supported by Jos Slovak and Antonia Kinlay as Jonah and Melody who try to bring an element of calm to the situation.

Whilst there are quite a few skirmishes between the two, there is a fun scene when the three cousins laugh hysterically as they recall a night out with their parents, Poppy and Grandma. The evening was spent at Benihana and ended chaotically as the food didn’t agree with their grandparents’ “Jewish digestive tract”! For me the most memorable scene was when Melody, a failed opera student complete with treble clef tattoo (a definite taboo of Jewish culture as Daphna points out), tries to calm the warring pair down with an operatic rendition of “Summertime” from Porgy & Bess, this is both excruciating and hilarious with Antonia Kinlay receiving a deserved round of applause at the end of it.

Josh Harmon’s script moves you from laughter to serious thought in equal measure and whilst the script is sweary in places it is not offensive and does not spoil your enjoyment. Michael Longhurst’s direction is well paced as you find your allegiances moving from Liam to Daphna in equal measure.

I am a fan of Jewish humour and thoroughly enjoyed this play.

After sell-out seasons at the St James Theatre and Arts Theatre, the comedy hit of 2015 visits the Theatre Royal Haymarket for a six week run prior to a national tour.

In BAD JEWS a beloved grandfather has died and a treasured family heirloom is up for grabs. But who is most deserving of it? Bossy, overbearing, fanatically religious Dapha? Her wealthy cousin Liam who’s just returned from skiing with his non-Jewish girlfriend Melody? Or Jonah, his brother, who would prefer not to get involved in the fight.

It is 2002 – another Royal Jubilee year, and HRH (Mary Roscoe) is due to open a new Science wing in a 'sink' comprehensive where Dr Derek Jones … END_OF_DOCUMENT_TOKEN_TO_BE_REPLACED

Dr Anna LaRosa (Dr Stefania Licari) has a lot to say. Just as well, as she’s the only one on stage in this medical comedy, which largely draws its … END_OF_DOCUMENT_TOKEN_TO_BE_REPLACED

Nikhil Parmar’s one-man show, originally written as a TV pilot, manages to touch on a wide range of themes from Islamophobia to modern fatherhood with … END_OF_DOCUMENT_TOKEN_TO_BE_REPLACED

Handel’s 1738 opera Serse (or Xerxes) is an exploration of power, love and human frailty. King Serse falls in love with the voice of his brother … END_OF_DOCUMENT_TOKEN_TO_BE_REPLACED

Lea Salonga has her fans. She also has some superfans, the ones who yell, “I love you Lea!” at almost every opportunity. If that wasn’t enough, there … END_OF_DOCUMENT_TOKEN_TO_BE_REPLACED