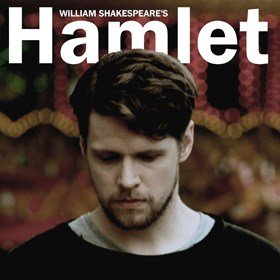 The Rose Theatre has put on a powerful version of Shakespeare’s tragedy Hamlet in their space among the archaelogical ruins of the first Tudor theatre built on Bankside, whose distant, watery remains are on occasions used to play with perspective in this production.

The play has been cut here to just seven characters and a speedy playing time of ninety minutes. This edit proves effective in the domestic sized playing space mostly utilised, focusing the drama on the intimate interaction of a family made dysfunctional by the crossing of boundaries, illicit and sexual, while also struggling with the torments of mental illness. By this means the issues occupying the royal court of Elsinore in the late middle ages are made wholly contemporary.

The use of modern dress assists with such parallels, most notably helpful in describing Gertred (Gertrude), Hamlet’s mother. Ably portrayed by Louise Templeton we see her as a superficial, vain woman, absorbed by the sexual pull and flattery of her new husband, Claudius. Portrayed by Nigel Fyfe as a charismatic, lustful and believably machivellian character.

There was a high profile production last year at The Old Vic of Sophocles Greek tragedy, Electra, the title role being performed by Kristin Scott Thomas. This edited version of Hamlet at The Rose is a welcome invitation to compare and contrast the two plays. Written almost two thousand years apart both deal with the descent of adult children, ( a son in Hamlet, a daughter and a son in Electra), as they seek vengeance for the betrayal of their murdered fathers against their mothers and replacement husbands.

Shakespeare is thought to have used Plutarch, the Greek historian (AD 46-120), as his source for the story and much of the imagery in Antony and Cleopatra. A poem by Arthur Brooke published in 1562 is likely to have been the source for Romeo and Juliet. Here, in the remains of a theatre built in 1567, when Shakespeare was just an infant, the differences between Hamlet and its older sister play of Electra, throw light on Shakespeare’s intentions, on the riddle that is Hamlet. Also making Shakespeare visible, five hundred years later, as a writer at a desk with an ancient play we know too besides him. Director, Diana Vucane is to be praised for her cut of Shakespeare’s text which brings these two sibling tragedies into such sharp relief.

When Daniel Day-Lewis played Hamlet the language seemed to be in control, pulling him along. Here, Chris Clynes is firmly in charge of his role, capable of exercising chilling menance, as his intimate relationships with others, in particular with women, are explored and exposed.

Suzanne Marie as Ophelia has a difficult brief in the playing space she occupies in this production, in which she must describe her character’s descent into madness. But surely this should be uncomfortable, disturbing viewing, close up as it would be in any domestic situation. In truth there can be nothing pretty or ethereal about the trauma of mental illness in any young woman, except of course for the lovely, sad lines about love and memory and flowers. It is at this point of the play, the soundtrack of music and lyrics communicates most effectively.

Dermot Dolan as Ophelia’s father, Polonius, carries us with him in this production. Laertes, his son, (notably given the name of a character in Greek mythology) is played by Ross McNamara with both dignity and passion.

Horatio, is, here the perfect foil for Hamlet, being the only surviving character in this small ensemble of players, he is played by Luke Jasztal with a delicate, contrasting calm as Hamlet descends into the special hell reserved for a destroyer, whatever provocation his cause.

Something is rotten in the state of Denmark.
A treacherous fratricide has torn the veil that separates this world from the next, and the only place that seems to be even more disturbed than the haunted grounds of Elsinore is the inexplicably transformed mind of the grieving prince who sets out on a lingering vendetta.

This production seeks to journey through Shakespeare’s well-known play, focusing on the perspective of a disturbed mind, thus defying the reality-based structure of time and space, recognizing solely the inconceivable logic of a dream.
To sleep, perchance to dream…
Good night, sweet prince!

Hamlet is played by – Chris Clynes – “Charismatic and commanding on the stage, he is an actor to watch and it is not difficult to imagine this boy becoming something of a star.”
(London Theatre1 – for Hedda Gabler at The Etcetera Theatre)