Home » Reviews » Review of Shakespeare’s LEAR at the Union Theatre 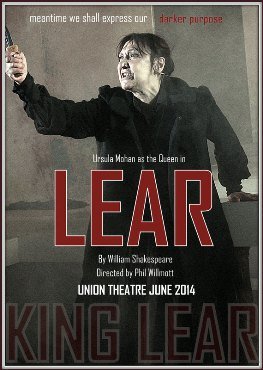 A monarch wishing to retire. Three daughters being given control of the kingdom. A bastard son trying to disinherit his legitimate brother. Betrayal, murder, mistaken identity and trickery…

King Lear is one of Shakespeare’s saddest tragedies, as the titular character struggles with madness and heartbreak, but what if King Lear were a woman?

This is a question I’d never really considered, but when faced with it, I suddenly realised what a fantastic concept it is. I’ve played Miranda to a Prospera and that worked really well, so I was intrigued and excited by Phil Wilmott’s casting decision.

When we arrived at the Union Theatre we found out it was a promenade play – we would be able to walk around the theatre and cast in parts one and two. Curiouser and curiouser…

The play is set in the modern day (which suited the concept), the action takes place in the centre of the theatre, with the third act set on a large table. The first two acts don’t really gain much from the audience standing around, but it gives it a more intense, intimate feel.

The acting was incredible – particularly Rikki Lawton (Edmund), Richard Derrington (Gloucester) and Joseph Taylor (the Fool) – and the vast majority of the cast really know how to deliver Shakespeare’s lines clearly and passionately. This is clear from the way the audience was engaged with the cast and their predicaments.

Ursula Mohan as Lear gives a truly remarkable performance as Lear, both emotionally and physically. Not for one moment did it seem unnatural that she was a woman – it was completely believable and certain lines took on new meaning when said by a queen rather than a king, particularly when Lear realises that the power has gone to her two elder daughters’ heads.

It was a bit long (yes I know it’s Shakespeare, but it felt too long) and at times it did feel a bit too polished – something that shouldn’t be the case when the audience can potentially move around a lot. There was also far too much dry ice!

However, this was a powerful piece that gave a new dimension to the story. Mohan really helps the audience to connect with Lear on a more emotional level and for the first time I actually felt sorry for the character.

Shakespeare’s Lear
Phil Willmott’s vibrant new production of Shakespeare’s masterpiece, KING LEAR, puts a mother at the heart of the action – supposing that it is a queen who, weary of public office, divides the kingdom amongst her daughters.

But the old woman finds it impossible to retire gracefully and as her mental faculties begin to fail she’s cast out by her eldest children, as their sister prepares to lead a French invasion in retaliation.

Meanwhile the Duke of Gloucester’s equally ruthless son plots to steal his brothers inheritance and the younger generations align in a savage plot to mercilessly destroy their parents. But will they succeed?

An epic double family drama about mothers and daughters, fathers and sons.

Reuniting the director Phil Willmott with regular collaborator, the actress Ursula Mohan in the title role, Lear’s Widow is the latest in a series of vivid and fast moving Shakespeare productions that have become a popular staple of The Union Theatre’s repertoire

This play was first put on at The Mill at Sonning in early 2010 - the world has, of course, changed significantly since then, and the script has been … END_OF_DOCUMENT_TOKEN_TO_BE_REPLACED

It’s easy to see why the Orange Tree has brought this one back for another run, less than a year after its first outing here. This is a bold, … END_OF_DOCUMENT_TOKEN_TO_BE_REPLACED

I always loved Choose Your Own Adventure books. Definitely not the Steve Jackson ones where you had to roll dice (who did that?) to find out whether … END_OF_DOCUMENT_TOKEN_TO_BE_REPLACED

Well, there’s a bit about Pablo Picasso’s (1881-1973) paintings in this show that bears his name. But it’s mostly about his approach towards women. … END_OF_DOCUMENT_TOKEN_TO_BE_REPLACED