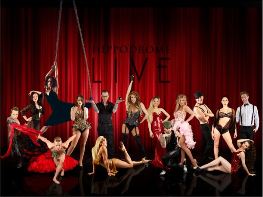 The show fills the audience with anticipation and love. The High standard of dance and acts in the show needs no trickery or smoke and mirrors. The show is a suggestive, clean cut to a high standard, which leaves the audience in suspense and hearts racing during this grand spectacular. The story is based around a man who falls asleep and wakes up in an imaginary world filled with seductive women and men teasing and playing with his emotions. As he attempts to interact with his dream he realises he can produce magic.

The story line has been kept simple and direct to the point. A young man falls asleep and wakes up in a imaginary world, full of beautiful men and women singing, dancing and flying above and around him. However, the young man can’t seem to get their attention. He then realises he can produce magic and he uses this to entice the people around him to interact with him in his dreams. The show is brought together by a series of artists.