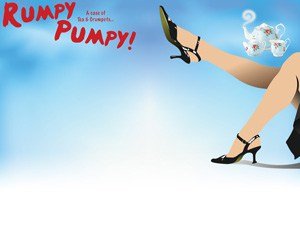 Rumpy Pumpy is a new musical based on a true story of 2 WI ladies that set out to legalise prostitution and undertake a search across the world (well Amsterdam, America and New Zealand) to find the perfect brothel, set against the back-drop of 3 working girls, their madam (Holly played by Mandi Symonds) and the policewoman determined to shut them down and send Holly to prison. It has branded itself the female ‘Full Monty’ however this musical fails to live up to this large claim.

Prostitution as a subject is no stranger to musical theatre however Rumpy Pumpy attempts to deal with larger issues such as the treatment of ‘working girls’ and domestic violence. In order for theatre to get across big messages such as this across you need to really care and believe the characters, unfortunately the plot didn’t give this a chance to happen. For example the main couple of the show, brothel madams Holly’s daughter, Sandi (played by Joanne Sandi) and her new neighbour Jamie (played by Adam Scott Pringle) had broken up and sung about this before they even had a chance to go on their first date. The story jarred at times and was tied up a little too conveniently and neatly at the end with everyone getting their ‘happy ever after’ which, bearing in mind a lot of the backstories, just didn’t sit well.

The direction at time also seemed poor with characters walking off stage only then for the same characters to reappear after a blackout. A simple lighting state change could have just as easily signified a change in location and kept the pace going. On a couple of occasions you also had men in drag, playing ‘working girls’ and members of the WI. Whilst you only had a small cast the additional numbers on stage were not needed and I failed to see the point of this, if humour then unfortunately this was not achieved. The space could have been used more creatively also and moments, such as the scene set in hospital, failed to deliver and lost their poignancy due to this.

The music also needed developing further. I went away humming ‘Red Bull and Cigarettes’ however the number, ‘The Perfect Brothel,’ failed to excite the first time, let alone after the 3rd reprise. ‘Wouldn’t it be Nice,’ the opening of Act 2 was one of the highlights of the show for me. That number also showed off the casts impressive harmonies and gave some energy to the show.

It is a shame as the show had some strong performances and the cast all did well with the material on offer. The highlights for me were Jennifer Harding and Scarlett Courtney who played Carol and Trish as well as numerous other cameos. They were cast perfectly for the roles and displayed an impressive array of accents between them. Jennifer’s solo in act 2 was particularly strong and made me wish I got to hear more of her voice throughout the show. The characters of Jean (played by Valerie Cutko) and Shirley (played by Marjorie Keys) were also played well and you believed there was a genuine friendship between them. There was a nice contrast in look, accent and mannerisms between them.

The piece as a whole does have potential with strong themes running throughout but ones that need developing before it can claim to be the female Full Monty.

A musical by Barbara Jane Mackie. Based on a true story.
When two nice ladies from the Hampshire Womens’ Institute, Jean Johnson and Shirley Landels, decide to campaign for the decriminalisation of prostitution and to improve conditions for Working Girls, brash, witty Portsmouth Brothel Madame, Holly Spencer, contacts them. Holly has the ‘perfect brothel’ that these WI ladies could be looking for. Her tidy brothel is health and safety checked and the Police and Town Councillors know they are there – ‘They’re our best customers!’ quips Holly.

When the two conflicting worlds of genteel Womens’ Institute Members and earthy Working Girls collide for tea and crumpets, comedy and chaos ensue in this very British Comedy. As Holly the Madame says to Jean and Shirley: ‘You ladies make the tea and we’ll bring the crumpets!’ ‘Rumpy Pumpy!’ is set against the firm backdrop of recession, redundancy and social breakdown in the UK. An exuberant comedy for stressed, uncertain and lonely times.
http://www.rumpypumpythemusical.co.uk/

How can a play be both charming and devastating? Through its tight script, abundant humour and pitch-perfect performances, 4th Country manages to … END_OF_DOCUMENT_TOKEN_TO_BE_REPLACED

Britain, so a London cab driver once told me, is obsessed with the Second World War, as though it happened just recently. Power Luncheon would seem, … END_OF_DOCUMENT_TOKEN_TO_BE_REPLACED

William J Dunleavy, author and star of this monologue play, is a writer and face to watch. He enters the room (as the staging is more geared towards … END_OF_DOCUMENT_TOKEN_TO_BE_REPLACED

Cirque du Soleil’s Luzia is a joyful whirl through a psychedelic Mexico, which reminds us why live theatre is so special. Anyone who goes to … END_OF_DOCUMENT_TOKEN_TO_BE_REPLACED