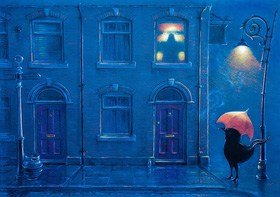 That at least part of Two Little Dickie Birds is set in a pub means that it has, at least at this venue, the privilege of being a play set in a pub, performed in a theatre that shares its premises with a pub. Life imitating art, or the other way around, or both, should anyone wish to see it any of those ways. At face value, the plot comes across as the ultimate triumph over the ultimate adversity, and almost formulaic, as if to say that because Pauline (Jo Dakin) suffered a number of negative life experiences, it should naturally follow that later in life, things really must turn out better in order to restore the universe’s equilibrium. Or something like that.

Brit Theatre has brought down an extraordinary set from their Manchester base – there’s so much of it. Put it this way: there are shows in substantially larger venues with fewer backdrops and props. It was almost laughable as one or two scene changes proved slightly problematic with quite that amount of set being pushed and pulled, which only added to the entertainment factor.

But if there wasn’t exactly a frantic rush with each scene change, this allowed the audience to come up for air, so to speak, in between sections of a loveable but dense life story. So much happens with so many off-stage characters the play begins to feel like a detailed description of a soap opera, complete with character development of each person mentioned.

All that set is, I suppose, not strictly necessary, but it does bring focus to each scene, and contrasts well with the meandering thoughts of Pauline. I quite like details, and attention to those details, and found myself furnished with these to my delight. The style of humour is not to everyone’s liking – I personally found it similar to the observational wit of the late Victoria Wood. The use of an elaborate answer to a question someone asks Pauline at an Oldham tram stop advances the narrative hilariously, and the occasional breaching of the fourth wall also helped to maintain interest.

There’s sufficient empathy generated as Pauline encounters struggle after struggle. I’m not exactly a fan of public transport self-service ticket machines, and who does enjoy a holiday season battle through airports and loathsome immigration officials? It is through the everyday activities of life portrayed here that the show has an almost universal appeal.

The character of Pauline seems to have incredible recall – a photographic memory, if you will. The story is full and complete, which I thought was refreshing in a world where so many contemporary plays leave their endings unsure and ambiguous. There’s a level of clarity in this show, despite the seemingly rambling script, that makes the play remarkably easy to follow, particularly when taking into account how much happens to Pauline. If anything it may be too easy to follow as little is left to the imagination. Nonetheless, this is a confident and enjoyable production, and a satisfying experience.

Two Little Dickie Birds
by David Alan, Jonathan Clay & Mandy Hester
The touching, yet comical story of Pauline, a northern pub landlady, searching for love in the most unlikely of places.

Pauline’s fed up! Unlucky in love and life, nothing ever seems to go right for her. It’s just her and her friend Peter versus the world. Two Little Dickie Birds is one woman’s emotional travelogue through her life’s ups and downs, as she takes us from Oldham to Brazil’s Copacabana Beach. On the way we meet her friends, lovers and customers.

Will the brewery ever get her order right?
Who exactly is Peter?
Will Pauline ever find true love?

This play was first put on at The Mill at Sonning in early 2010 - the world has, of course, changed significantly since then, and the script has been … END_OF_DOCUMENT_TOKEN_TO_BE_REPLACED

It’s easy to see why the Orange Tree has brought this one back for another run, less than a year after its first outing here. This is a bold, … END_OF_DOCUMENT_TOKEN_TO_BE_REPLACED

I always loved Choose Your Own Adventure books. Definitely not the Steve Jackson ones where you had to roll dice (who did that?) to find out whether … END_OF_DOCUMENT_TOKEN_TO_BE_REPLACED

Well, there’s a bit about Pablo Picasso’s (1881-1973) paintings in this show that bears his name. But it’s mostly about his approach towards women. … END_OF_DOCUMENT_TOKEN_TO_BE_REPLACED