Home » Reviews » The Real Inspector Hound and The Actor’s Nightmare 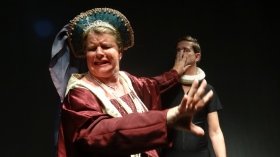 The first piece The Actor’s Nightmare doesn’t quite come off. The idea is promising. An actor doesn’t show up so a last-minute stand-in (Tim Shaw), who happens to be seated in the stalls is called up. Answering to the name of George or Stanley he doesn’t know his lines. The Actor’s Nightmare is like Noises Off and The Play that Goes Wrong, in that it is a play about putting on a play. It is full of theatrical in-jokes, non-sequiturs and absurdities.

There are some good moments and laughs especially in the sequence which mixes up Samuel Beckett’s End Game with both characters in green wheelie bins and black bin liners quoting Shakespeare and Cole Porter’s Kiss Me Kate. But ultimately the material is just too thin to engage an audience for 45 minutes. Sadly a bridge too far.

The Real Inspector Hound weaves together parody, pastiche and punning to create a wonderfully entertaining and ingenious one act comedy. It’s part send-up of Agatha Christie’s The Mousetrap and part dig at the pomposity and self-importance of theatre critics. 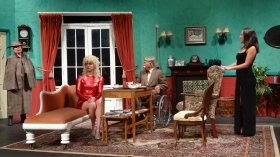 The country house setting is superbly done. Jim Trimmer is wonderful as the handlebar-moustached, crusty and tweed-jacketed, Major Muldoon of Muldoon Manor as he crashes around the house in his wheelchair, deliberately mowing down his hapless guests. The suggestively named Felicity Cunningham (Francesca Stone) and Lady Cynthia Muldoon( Dionne King) are both excellently drawn as they compete for the attention of the charmer Simon Gascoyne (Matt O’Toole). The resulting farcical comedy is a cross between Fawlty Towers and Joe Orton’s Loot. Lara Parker as the lugubrious Mrs Drudge is superb. The tea time scene in which she says “Excuse fingers” as she drops a lump of sugar into each cup, in turn, is grotesquely funny.

The comedy is all the funnier for the absurd running commentary provided by the two critics, Birdboot (Andy Smith) and Moon (Luke Daxon) seated in the front row. The petty jealousies between themselves and the senior critic Page (wonderful name for a critic) are excruciatingly accurate. Who will get his job when he dies they wonder? It’s all too horribly close to the bone. Birdboot lusts after Felicity Cunningham and fancies that a good word from him can launch her from the provinces to the West End. Moon on the other is equally deluded as he writes impossibly pretentious reviews comparing the writer to Dante and Dorothy L Sayers. He gets the biggest laugh of the night by absurdly ending one of his passages with the phrase: “At this point in the drama one is justified in asking where is God?” This scene will make all reviewers wince with horrible self-recognition.

The Real Inspector Hound is a classic of the English comic tradition. This fine production does it justice. The director Harry Medawar is to be congratulated for reviving this wonderful one-act gem which brings such delight to all lucky enough to see it.

Tom Stoppard’s classic, The Real Inspector Hound, written in 1961 and first produced in 1968. With a different guest star at every performance, this play, a gentle parody of The Mousetrap, is sure to leave you smiling.

For this production, The Real Inspector Hound is paired with Christopher Durang’s comedy The Actor’s Nightmare about the all too real dangers of acting. Hugely popular in America, this comedy is rarely seen in the UK.