Producer Runaway Entertainment is delighted to announce that the critically acclaimed, smash hit, supernatural thriller 2:22 – A Ghost Story will extend its run at The Criterion Theatre when the current run ends on 4 September. It will play a 18-week season running through to 8 January 2023. The extension means that the production will have its first Halloween performance on Monday 31 October – be afraid! 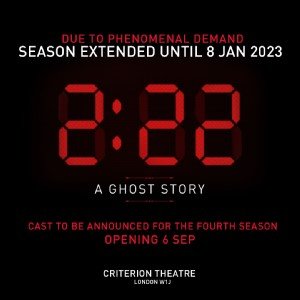 Last week the Center Theatre Group announced the US premiere of 2:22 A Ghost Story at the Ahmanson Theatre, Los Angeles where it will run from 29 October to 4 December 2022.

The production began its life last summer at the Noel Coward Theatre starring Lily Allen, Julia Chan, Hadley Fraser and Jake Wood. It then transferred to the Gielgud Theatre for 10 weeks from 4 December 2021. The production there, starring Stephanie Beatriz, James Buckley, Elliot Cowan and Giovanna Fletcher, completed its run on 12 February 2022. The current cast at the Criterion Theatre features Tom Felton as Sam, Mandip Gill as Jenny, Beatriz Romilly as Lauren and Sam Swainsbury as Ben. Cast details for the extended run will be announced soon.

Following three record-breaking seasons at the Noel Coward, Gielgud Theatre and Criterion Theatre, with a host of acclaimed star performances, this edge-of-your-seat, supernatural thriller will extend its run at the Criterion Theatre for 18 weeks.

2:22 is written by award-winning writer Danny Robins, creator of the hit BBC podcast The Battersea Poltergeist, and is directed by Matthew Dunster. Look out for the clues to unlock the mystery in this brilliantly funny and intriguing play; it’s an adrenaline-filled night where secrets emerge and ghosts may, or may not, appear…

Danny Robins said: ‘When this play opened in the summer of 2021 I couldn’t have dreamed that we’d be where we are now – in our third West End theatre, planning our fourth season! With each run, it’s been so great to see our new casts make it their own, and I’m so delighted that this modern ghost story of mine keeps connecting with audiences. I hope it’s more than just a play, it’s an exciting, adrenaline-filled night out that will have you laughing and jumping in equal measure and then you’ll spend the rest of the night talking about it with your mates, trying to crack the mystery! Do ghosts really exist? There’s only one way to find out – get yourself down to the Criterion to see 2:22!‘

Matthew Dunster said: ‘On we go again! It’s such a thrill to know we get to extend our run of 2:22 at the Criterion through Christmas and into the New Year. And we finally get to do our spooky play on Halloween. What a night that will be.

When we dared to put this new play straight into the West End last summer we couldn’t have dreamed it would stir the people’s imagination in the way it has this past year. We love doing Danny’s wonderful play for our audiences, and their ongoing loyalty to the show and their joy at discovering each new cast has been so exciting for us..’

What do you believe? And do you dare discover the truth?

“THERE’S SOMETHING IN OUR HOUSE. I HEAR IT EVERY NIGHT, AT THE SAME TIME”

Jenny believes her new home is haunted, but her husband Sam isn’t having any of it. They argue with their first dinner guests, old friend Lauren and new partner Ben. Can the dead really walk again? Belief and scepticism clash, but something feels strange and frightening, and something is getting closer, so they’re going to stay up… until 2:22… and then they’ll know.

“A slick, chilling, romp of a play” The Guardian

2:22 – A Ghost Story is produced by Tristan Baker and Charlie Parsons for Runaway Entertainment, Isobel David and Kater Gordon.

Michael Harrison and the Really Useful Group are thrilled to announce that The Wizard of Oz, the musical based on the iconic story by L. Frank Baum, … END_OF_DOCUMENT_TOKEN_TO_BE_REPLACED

Following major demand for tickets, the Queen of comedy Dawn French has announced a host of new UK tour dates for her critically acclaimed live … END_OF_DOCUMENT_TOKEN_TO_BE_REPLACED

The multi-award-winning musical Come From Away, which celebrated its 1000th performance in the West End last night, Monday 28th November, announces … END_OF_DOCUMENT_TOKEN_TO_BE_REPLACED

The UK and Ireland Tour of Disney’s The Lion King will welcome 12 new members to its cast of over 50 actors, singers and dancers this winter. The … END_OF_DOCUMENT_TOKEN_TO_BE_REPLACED