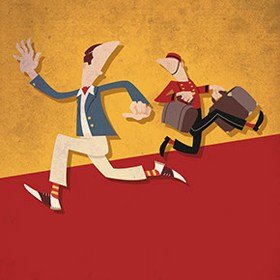 Theatre company Antic Disposition, founded by Ben Horslen and John Riseboro, specialise in classic plays presented in unusual places such as churches and cathedrals. Their current production of The Comedy of Errors is performed in Gray’s Inn Hall – home to the original production in 1594 apparently – which is quite a coup, to say the least.

It is also quite a coup to have gathered together a group of such talented actor/ instrumentalists, as virtually everyone in the cast also plays in the band: Adriana (Ellie Ann Lowe) plays a mean saxophone, her sister Luciana (Giovanna Ryan) is virtuosic on the double bass, as is Dromio of Syracuse (Andrew Venning) on trumpet, Antipholus of Ephesus (Alex Hooper) on banjo, ‘Joey Merchant’ (Scott Brooks) on drums and the Courtesan (Susie Broadbent), with Marilyn Monroe wig, on vocals.

This production is set in 1929 in a hotel in Ephesus managed by Antipholus of Ephesus (‘home Ant’), assisted by his hapless bellhop assistant Dromio (‘home Dromio’). Duke Solinus (Philip Mansfield) is boss of the mafia and when confronted by Egeon (Paul Croft), who has risked his life arriving on the shores of a hostile country in search of his lost twin son, threatens him with a gun while giving him 24 hours to find the necessary ‘bribe’ to escape death.

The period works rather better than the setting. Since the entire action of the play happens in one day on the streets of Ephesus the hotel really only features as a backdrop to the band – who introduce the show and entertain us at various points throughout the evening – and to a gratuitous and not terribly funny ‘turn’ from Pinch, the magician brought into the action to ‘cure’ the mad Antipholus, which opens the second act. The girls are prettily dressed in backless black numbers and the guys in timeless suits, and the twins, both sets, are nicely matched. There is also a neat contrast between the delight of Antipholus of Syracuse (Away Ant – William de Coverly) on being greeted on the streets by ‘friends’ offering him gifts and the increasing desperation of Home Ant, shut out of his own house by his wife and her servant; and the horror of Away Dromio on learning he is betrothed to a greasy kitchenmaid and the resigned long-suffering of the beaten-black-and-blue Home Dromio (Keith Higinbotham). The pace is fast and physical, not to say frenetic, and the emphasis is on the laughs – which leads, inevitably, to a good deal of boisterous overacting.

The Comedy of Errors can be played as a simple series of farcical misunderstandings, and done in such a way it can be tedious. But one should not be allowed to forget that beneath the hilarity lies a story of a family torn apart by a long-ago shipwreck and the agony of a father who has spent years searching for his lost son, and the increasing desperation of Home Ant as he fears he is going mad; not to mention the shock of coming face to face with a brother he never knew existed, and a father and mother he thought were dead.

This production, by playing up the comedy and underplaying the darkness, doesn’t quite achieve the full emotional impact of the denouement. Nor does it aim to. There is enough to enjoy in the astonishing variety of confused expressions on the faces of both sets of twins, and in the sheer exuberance of a bunch of actors, beneath the stern gaze of Lords Liverpool and Bingham and others, chasing one another around and about Gray’s Inn Hall like demented schoolchildren.

Presented in association with Shakespeare400, Antic Disposition’s The Comedy of Errors marks the 400th anniversary of Shakespeare’s death in 1616.

One of Shakespeare’s earliest plays, as well as his shortest, The Comedy of Errors is a riot of slapstick humour and comic mayhem.

Antipholus of Syracuse and his longsuffering servant Dromio arrive in the glamorous resort town of Ephesus in search of the twin brothers they both lost as babies. The pair are swept into a bewildering society of mobsters and misfits, and find themselves at the centre of a chaotic double case of mistaken identity.

A brand new production inspired by one of Hollywood’s best-loved comedy movies, Antic Disposition’s The Comedy of Errors combines Shakespeare’s most farcical play with live music and songs performed by a talented cast of actor musicians.

Hidden away in a tranquil courtyard moments from Holborn and Chancery Lane, the historic Gray’s Inn Hall is one of the few remaining original Shakespearean venues and has changed little since Elizabethan times. Built at the heart of Gray’s Inn, one of London’s four ancient Inns of Court, the Hall frequently hosted lavish revels and entertainments, including, on the night of 28 December 1594, the first recorded performance of The Comedy of Errors.

The Comedy of Errors is directed by Ben Horslen and John Risebero, who also designs, with musical direction by Nick Barstow and lighting design by Elizabeth Gunby.

The producers and creative team are delighted to announce a new booking period for the West End production of the Tony, Grammy and Olivier … END_OF_DOCUMENT_TOKEN_TO_BE_REPLACED

Having had to shut down the production of Bruce Norris’ seminal play Clybourne Park at final dress rehearsal in March 2020, Trish Wadley Productions … END_OF_DOCUMENT_TOKEN_TO_BE_REPLACED

9 to 5 The Musical Celebrates DOLLY PARTON Being Awarded 47 New Gold and Platinum Certifications. As the UK Tour recommences Dolly Parton’s 9 to 5 … END_OF_DOCUMENT_TOKEN_TO_BE_REPLACED