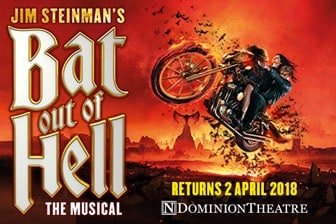 In celebration of the official opening night of Jim Steinman’s Bat Out Of Hell – The Musical at the Dominion Theatre on Thursday 19 April 2018, and due to overwhelming demand for tickets, the producers have announced a new booking period from 30 July to 27 October 2018, with tickets going on sale at 10.00am on 19 April. The winner of the Evening Standard Radio 2 Audience Award for Best Musical 2017 began previews on Monday 2 April.

Bat Out Of Hell – The Musical wowed critics and public alike when it played limited seasons at Manchester Opera House, London Coliseum and Toronto’s Ed Mirvish Theatre in 2017, and has been seen by nearly 500,000 people to date.

For the stage musical, the legendary and award-winning Jim Steinman has incorporated iconic songs from the Bat Out Of Hell albums, including You Took The Words Right Out Of My Mouth, Bat Out Of Hell, I Would Do Anything For Love (But I Won’t Do That) and Two Out Of Three Ain’t Bad, as well as two previously unreleased songs, What Part of My Body Hurts the Most and Not Allowed to Love.

Jim Steinman’s Bat Out Of Hell – The Musical is a romantic adventure about rebellious youth and passionate love, set against the backdrop of a post-cataclysmic city adrift from the mainland. Strat, the forever young leader of The Lost, has fallen for Raven, daughter of Falco, the tyrannical, ruler of Obsidian.