Disney’s hit West End musicals Aladdin and The Lion King have today announced that a summer Pop-Up will open its doors to Disney fans old and new in Covent Garden throughout August. Located at 25 Long Acre in the heart of Theatreland, the Pop-Up will be open every day from Tuesday 31st July until Sunday 26th August with a host of free interactive experiences and special events to enjoy.

Within this unique space, guests will be able to explore the iconic masks, puppets and costumes from the Tony-Award-winning The Lion King up-close and learn about the inspiration behind many of the show’s impressive designs. Guests will also have the opportunity to step inside a specially-created ‘Cave of Wonders’, where they will be able to take a photo with the legendary lamp from Aladdin. 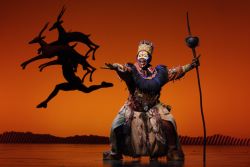 The fun continues around Covent Garden’s Piazza where visitors are invited to delve into a treasure hunt to uncover four magic lamps – each offering a clue to an Aladdin themed puzzle. Those who unscramble the message can take home a limited edition poster as their well-earned reward.

In addition to this, a variety of free events will take place daily within the Pop-Up including performances from cast members of the two West End shows, puppetry demonstrations and stage makeup masterclasses, as well as vocal and movement bite-sized workshops to get a first-hand flavour of the shows’ music and choreography. The full schedule is available to view at www.disneyonstage.co.uk and access to events is available on a first-come-first-served basis.

This summer Disney UK celebrated the second anniversary of Aladdin in the West End, which opened at the Prince Edward Theatre in June 2016, while The Lion King enjoys its 19th triumphant year at the Lyceum Theatre.

After sell-out runs at Hope Mill Theatre, Manchester, and The Park Theatre, London, in 2022, Maureen Lipman returns to the West End with a performance … END_OF_DOCUMENT_TOKEN_TO_BE_REPLACED

THE PHANTOM OF THE OPERA at Her Majesty’s Theatre today announces Jon Robyns as ‘The Phantom’ from Monday 3 April 2023, Holly-Anne Hull as ‘Christine … END_OF_DOCUMENT_TOKEN_TO_BE_REPLACED

2023 marks the 50th Anniversary of the legendary smash hit musical The Rocky Horror Show, as it continues to play a newly extended tour through 2023 … END_OF_DOCUMENT_TOKEN_TO_BE_REPLACED