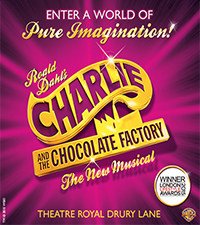 Five aspiring stage managers have won their big break into the theatre industry after receiving a Golden Ticket to a week-long paid work placement on Roald Dahl’s Charlie and the Chocolate Factory, the record-breaking West End musical, directed by Sam Mendes.

The five lucky winners were Lizzie Alderson, 25, from Maidstone, Kent, Jyothi Giles, 22, from Oxford, Joeleen Green, 29, from Albany, Australia, Patrick Mullan, 27, from County Derry/Londonderry, Northern Ireland, and Katie Williams, 27, from Murwillumbah, Australia. They were shortlisted from hundreds of applicants, following a demanding assessment day at the Theatre Royal Drury Lane, to be named this year’s recipients of the Golden Ticket.

At the end of the week-long placement earlier this month, Katie Williams was named the most promising candidate and receives a two-month paid placement as a production intern on the show, one of the largest productions in the West End.

On her win, Williams said: “As a Golden Ticket winner I was given an all access pass to the inner workings of Charlie and the Chocolate Factory. My week was spent exploring and observing all of the backstage departments that come together to create this mammoth show, from learning how to secure a wig on a performer, to testing microphones, to discovering how they really make Willy Wonka’s coat disappear. Every day I discovered something new about the show. I’m thrilled to have been chosen to stay and work on the show for the next two months. I’m very much looking forward to continuing to work with and learn from some of the best professionals in the theatre industry.”

It marks a third year for the scheme which invests in emerging talent in the UK, awarding successful candidates the opportunity to gain experience working with the production’s highly-experienced backstage team in the lighting, sound, automation, wardrobe, wigs, make-up and stage management departments.

The Golden Ticket placements are part of Warner Bros. Creative Talent, a programme of investment in skills and training for the UK creative industries.

Roald Dahl’s Charlie and the Chocolate Factory has quickly become one of the West End’s most popular and successful stage musicals. It has broken multiple records at the Theatre Royal Drury Lane, where it has been seen by over 1.8 million people since it opened in June 2013. It is currently taking bookings until 7 January 2017.