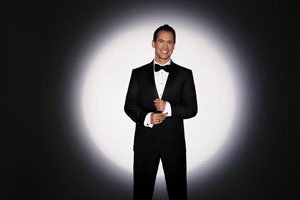 Beautiful Day, a new self-produced solo classical crossover concert and double album featuring popular songs that cross the classical and pop genres, all performed in a vocal style comparable to Il Divo, Josh Groban and Russell Watson, has reached No1 in the itunes Classical Album chart and No.4 in Vocals just a few days after release.

“This has been an incredible week after 10 months of intensive work,” said Tom. “I first started working on the project 10 months ago preparing the CD/show/setlists and it hasn’t stopped until now. I am exhausted but really chuffed! And seeing myself outselling a legend like Barbra Streisand is just surreal!”

Tom added: “Life takes many twists and turns but for me one thing has never changed… I love to sing! I have a passion for many types of music and wanted to record a double album of 28 songs that cross the classical & pop genres. So, here it is. When I listen to songs it’s extremely important for me to have a connection with the lyric. No matter how beautiful the tune, the words need to be the driving factor as this is how a performer connects to their audience. Every song featured on this album tells a story as well as being a stunning composition so I hope you hear 28 stories with 28 beautiful melodies!”

Tom has starred in many West End, Broadway and international musical theatre productions including playing Marius in Les Misérables, Raoul in The Phantom of the Opera, Mary Sunshine in Chicago, Tony in West Side Story, Anatoly in Chess and two new productions for the Royal Opera House.

He has also performed with some of the world’s greatest orchestras including the BBC Concert Orchestra on Radio 2 and the RTÉ Concert Orchestra at the National Concert Hall in Dublin, and is a BBC international award winning singer. He has performed around the world including Australia, Fiji, South Africa, China and much of Europe.

After creating the “absorbing and provocative” Version 2.0 and the “eminently lovable” Letters, Kashyap Raja returns to London with his new play Earth … END_OF_DOCUMENT_TOKEN_TO_BE_REPLACED