This is the moment we’ve waited for…. & JULIET makes a joyous return to London’s West End!

The award-winning musical – which had been thrilling audiences before the closure of theatres last March – will return to the Shaftesbury Theatre from Friday 24 September. 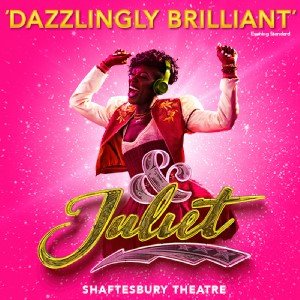 As well as the three Olivier Awards, throughout the last year & Juliet also won 6 Whatsonstage Awards – the most of any production in 2020 – and won further awards at The Black Theatre Awards and The Mousetrap Theatre Awards. The show also performed on BBC1’s Strictly Come Dancing in the coveted slot in ‘Musicals Week’.

Romeo who?! With her bags packed and ready to escape Verona, Juliet recovers from heartbreak in the best way possible… by dancing the night away with her best friends by her side! But when the sparkle fades, the confetti falls and reality catches up, it’s clear that Juliet needs to face her past in order to find her future. Can she reclaim a story that has been written in the stars? Is there really life after Romeo… or could he be worth one more try?

Come along for the ride as the original Anne Hathaway takes on her husband William Shakespeare to remix his legendary play. As comedy meets tragedy, will Juliet get the ending she truly deserves? And most importantly, can their love survive this battle of wills?

Fabulously fresh and riotously funny, & JULIET explodes with dozens of pop anthems you already know and love by legendary songwriter Max Martin, including …Baby One More Time, Since U Been Gone, Roar, It’s My Life, I Want It That Way, and Can’t Stop the Feeling! The show also includes the brand new song One More Try, written especially for the show by Max.

Brought to life by an award-winning creative team, this vibrant, colourful and timely musical is directed by Luke Sheppard (In the Heights, Rent) with a story by David West Read (Netflix’s Schitt’s Creek), electrifying choreography from Jennifer Weber and stunning set design from Soutra Gilmour.

Sir David Suchet makes his eagerly awaited return to UK stages in POIROT AND MORE, A RETROSPECTIVE this autumn (2021). Following a successful tour of … END_OF_DOCUMENT_TOKEN_TO_BE_REPLACED

Selladoor Worldwide is delighted to cheer on the full cast of BRING IT ON THE MUSICAL, who will be joining musical theatre and TV star Amber Davies as … END_OF_DOCUMENT_TOKEN_TO_BE_REPLACED