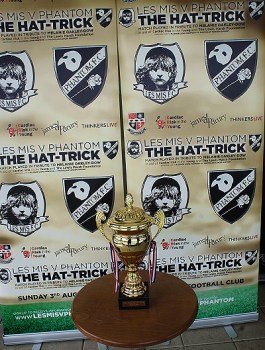 Les Mis vs Phantom, The Hat-Trick Charity Football Match was played on Sunday 3rd August, with The Phantom of The Opera winning 4 goals to 3, and with thousands of pounds being raised for charity.

The match was played in tribute to Melanie Oakley-Dow, who many of you will know was the inspiration for starting this event, in aid of Cardiac Risk in the Young.

Melanie, sadly lost her battle with cancer at the end of last year. She is extremely missed by her family and all who knew her, and Les Misérables is not the same without her.

Christopher Key, who is Resident Director at Les Miserables London has been putting on this event for a couple of years, and this year was even bigger and better. Up until today, Les Mis have won every match, so it may have hurt a little when Chris Handed over the trophy to Phantom at the end of the match, but don’t feel too bad for him as he won man-of-the-match for his goal-keeping skills.

The two teams were not only made up of cast and crew, past and present, but also some other well-known faces. Les Mis had two actors currently in Hollyoaks, and Ricky from Towie, and Phantom had Ralf Little and a few ex pro-footballers or “ringers” as Ricky from Towie joked with me after.

The first goal of the day came from Tam Mutu who was playing a blinder until he had to go off with an injury. Ralf Little who used to play semi-pro football was telling me how good a footballer Tam is, then saying he was kind of glad he had to go off, as he joked that it may have helped his team to win.

The day was full of fun, face-painting, cake stores, and live performances from studio 74, a local dance school.

Geronimo Rauch sang Nessun Dorma, so beautifully. Songs included, Lucy Jones and Dont Stop Believing, Carrie Fletcher and Let it go from Frozen, Liam Tamne and Happy, getting everyone up on their feet. Probably the big treat of the day, was to have four Jean Valjean’s performing Bring Him Home. These were Geronimo Rauch, Chris Holland, Peter Lockyer and Daniel Koek.

The football match supports a couple of charities this year, Cardiac Risk in the Young, and The Lewis Marsh Foundation, which has been set up after a close family friend of Chis, who lost her brother when he was just 11 years old, of an unknown heart defect. The Lewis Marsh Foundation raises money so that people can get screened in the hope another family will not have to go through the same tragic loss.

Well done to everyone who was there supporting the event. The total money raised this year will be announced by Chris after a well earned holiday next week.

Connect with us at LondonTheatre1.com