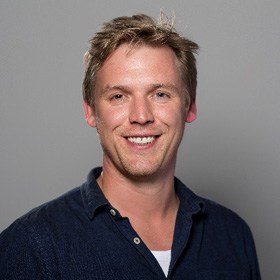 Theatr Clwyd has announced the appointment of Liam Evans-Ford as its first Executive Director. Liam joins Theatr Clwyd from York Theatre Royal where he is currently Associate Producer and will work alongside Artistic Director Tamara Harvey, who joined Theatr Clwyd in 2015.

The new Executive Director will work in partnership with Tamara Harvey to develop creative partnerships, build revenue streams and maximise the potential of the theatre as a centre for the local community, creating a dynamic, innovative hub for the future. His appointment comes as the theatre reaches its 40th anniversary milestone and ahead of a capital redevelopment of its iconic building.

Commenting on the appointment Cllr Ron Davies, Chairman of the Theatr Clwyd Board of Governors said:
“I am delighted to welcome Liam to Theatr Clwyd. He stood out as a candidate for this important role and I’m confident that both Liam and Tamara Harvey will lead the theatre to much success.”

Tamara Harvey, currently in rehearsals for her debut Theatr Clwyd production said: “I am thrilled that Liam is joining us at this crucial point in the development of the theatre – his knowledge, experience and energy will help drive Theatr Clwyd forward and our team are excited to work with such a brilliant arts leader.”

Liam is currently Associate Producer for York Theatre Royal and has been instrumental in the theatre’s £6 million pound capital re-development, leading on business continuity planning and delivery. This has resulted in the successful reinvention of an iconic and historic building, fit for both an ambitious 21st century theatre company and for the local community. A key member of York’s senior management team, he has developed the theatre’s commercial potential through the filming and release of the hit production of The Railway Children, worked extensively with some of the UK’s leading theatrical producers and helped ensure the continued sustainability of the organisation.

Damian Cruden, Artistic Director of York Theatre Royal said: “In his time here Liam has forged strong relationships with members of the community, helping us to open the door to more people and letting people feel genuine ownership of our organisation. He will be much missed but we are so happy to see he’s got such a great job to move into.”

Liam is co-founder of the acclaimed Sprite Productions, which has now produced 10 years of site-specific Shakespeare at Ripley Castle. He was also the first producer of The Factory, leading the presentation of their work at some of the UK’s top theatres including The Globe, Hampstead Theatre and The Rose, at music festivals, bars and underground tunnels, around Europe and for BBC Radio 4. In addition he was also a producer on the £1.3 million production of York Mystery Plays in 2012, the site-specific Blood + Chocolate for Pilot Theatre, Slung Low and York Theatre Royal. From 2014 to 2015 he was Interim General Manager for Sheffield Theatres.

Speaking at Theatr Clwyd today Liam Evans-Ford said: “I am excited and honoured to be joining the team at Theatr Clwyd. The potential of an organisation with such a strong track record in theatre making over the last 40 years is vast. With three theatre spaces, a cinema and art galleries – not to mention the theatre making skills within the productions team – Theatr Clwyd has a lot to offer the local community, the cultural industry in Wales, the UK and beyond. Tamara is a brave and skilled director and someone I already admire greatly – I’m looking forward to working with her and the rest of the team to build a strong base for the next 40 years of theatre making in Clwyd.“

Following its multiple West End runs, and continuing success at its home – The Other Palace, Heathers the Musical will embark on its highly … END_OF_DOCUMENT_TOKEN_TO_BE_REPLACED

After creating the “absorbing and provocative” Version 2.0 and the “eminently lovable” Letters, Kashyap Raja returns to London with his new play Earth … END_OF_DOCUMENT_TOKEN_TO_BE_REPLACED