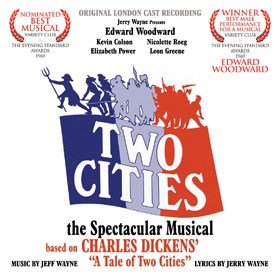 Stage Door Records are pleased to announce the Original London Cast Recording of Two Cities, will be released on June 24th, 2016. The CD release continues Stage Door’s commitment to preserve ‘lost’ British theatre scores of the past 50 years.

Charles Dickens’ classic novel ‘A Tale Of Two Cities’ was developed as a musical in the mid sixties by theatre producer Jerry Wayne who commissioned his son Jeff to compose the score for the project. With a book by Constance Cox, music by Jeff Wayne and lyrics by Jerry Wayne; ‘Two Cities’ opened at London’s Palace Theatre on February 27th 1969. The musical starred Edward Woodward (as Sydney Carton), Kevin Colson (as Charles Darnay), Elizabeth Power (as Lucie Manette), Nicolette Roeg (as Madame Defarge) and Leone Greene (as Monsieur Defarge). Although reviews were mixed, ‘Two Cities’ was nominated for ‘Best Musical’ at the 1969 Variety Club and Evening Standard Theatre Awards with Edward Woodward winning both awards for ‘Best Male Performance in a Musical’.

ʻTwo Citiesʼ opened at the Palace Theatre, Cambridge Circus in February 1969, but very little has survived about it. What has survived reveals it being received by the critics in the way we feel about Marmite!
Or perhaps as Mr. Dickensʼ opening line exclaims – ʻIt was the best of times, it was the worst of times…ʼ
I have distinct memories of standing ovations on opening night (ʻthe best of times…ʼ) followed by the Marmite reviews and largely empty houses for the first few weeks (ʻthe worst of times…ʼ).
But then ‘word-of-mouth’ spread that in fact ‘Two Cities’ was pretty good, including an award-winning performance by its leading man, Edward Woodward. While the remaining run played to virtually sold-out audiences, ‘Notice’ from the theatre owners had already condemned ‘Two Cities’ to the guillotine.

NOTE: ‘Back in the day’, cast albums were recorded on the first Sunday after opening night with the cast and musicians from the show. A few run-throughs and takes onto stereo tape were allocated, and that was your lot!

The CD features previously unreleased original 1966 demo recordings for the show, including several songs that would be later cut from the production.

Following its multiple West End runs, and continuing success at its home – The Other Palace, Heathers the Musical will embark on its highly … END_OF_DOCUMENT_TOKEN_TO_BE_REPLACED

After creating the “absorbing and provocative” Version 2.0 and the “eminently lovable” Letters, Kashyap Raja returns to London with his new play Earth … END_OF_DOCUMENT_TOKEN_TO_BE_REPLACED