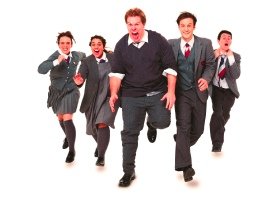 Mischief Theatre, the Olivier award-winning company behind The Play That Goes Wrong, announces it will take over the Vaudeville theatre with a season of new work from September 2019.

Opening with comedy Groan Ups, the original Mischief company reunite to bring their unique inventive hilarity to the West End.

Mischief Theatre will present three new productions at the Vaudeville theatre during their residency, which will end in August 2020. Tickets for Groan Ups will go on public sale on Monday 28 January or can be purchased now via nimaxtheatres.com and MischiefTheatre.co.uk. Further productions will be announced in due course.

Nica Burns, co-founder of Nimax Theatres, said: ‘In 2016 Mischief Theatre had three comedies running at the same time in the West End: The Play That Goes Wrong at the Duchess, Peter Pan Goes Wrong at the Apollo and The Comedy About a Bank Robbery at the Criterion. Mischief’s three writers, Henry Lewis, Jonathan Sayer and Henry Shields, were all under 30. An extraordinary achievement and probably a world record. We jumped at the chance to partner with Mischief and their producers Kenny Wax and Stage Presence to present a truly record-breaking three brand new comedies in one year at the Vaudeville. From New York to Christchurch and many cities in between, audiences have been falling over with laughter at Mischief’s antics. In fact, the seats at the Duchess have been rocked with so much laughter in the last five years that we are replacing them!’

Kenny Wax, producer of Groan Ups and The Play That Goes Wrong, said: ‘In seven years, to have graduated from a pub theatre filler slot to a three-play 12-month residency at the Vaudeville (courtesy of the tremendously supportive Nica Burns) to sit alongside their two long-running comedies at the Duchess and Criterion, a record-breaking run on Broadway and productions currently running on every continent except Antarctica, the meteoric rise of this extraordinarily talented group of writers and actors seems to know no bounds. As producers, we are delighted to have guided their journey and become their friends.’

GROAN UPS
Written by Henry Lewis, Jonathan Sayer and Henry Shields
Directed by Kirsty Patrick Ward
20 September – 1 December 2019
Press Night: 10 October 2019
From the parents of The Play That Goes Wrong comes a brand-new comedy all about growing up.
Are we the same people at 30 as we were at 13? Does school life determine our future? Do we ever grow out of our school crush? Playing an unruly classroom of kids and anarchic high school teenagers, through to the aches and pains of adulthood, the original Mischief company are back in the West End with their first new play since 2016.

Mischief Theatre was founded in 2008 by a group of graduates of The London Academy of Music and Dramatic Art (LAMDA) and began as an improvised comedy group. Mischief Theatre performs across the UK and internationally with improvised and original scripted work. Their other production The Comedy About A Bank Robbery is currently at the Criterion Theatre and on a national UK tour whilst The Play That Goes Wrong is also on a national UK tour and is has recently completed a two year run on Broadway. The company is led by Artistic Director Henry Lewis and Company Director Jonathan Sayer.

Groans Up is produced in the West End by Kenny Wax Ltd and Stage Presence Ltd. Further productions to be announced inb due course.