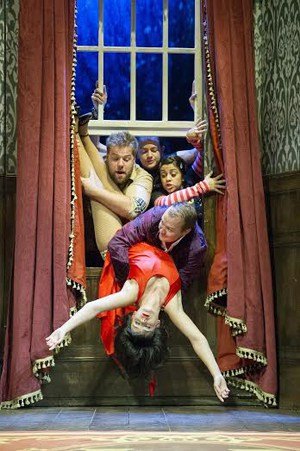 The Play That Goes Wrong announce that there will be a new and doubly incompetent bunch of ‘would be’ thespians taking to the stage at the Duchess Theatre from Wednesday 29 June 2016.

Mischief Theatre founder and writer Henry Lewis said, ‘We are disappointed to have found an even more terrible set of actors to join the Cornley Polytechnic Drama Society in The Play That Goes Wrong. Regrettably, this year will see even more forgotten lines, missed cues, walk-outs and actor and director spats than ever before.’

Awarded the 2014 Whatsonstage.com Best New Comedy and the 2015 Olivier Award for Best New Comedy, The Play That Goes Wrong continues to thrive in the West End. It is a remarkable rags-to-riches story for a play which started its life at a London fringe venue with only four paying members of the public at the first performance, and has played to an audience of over a quarter of a million.

Mischief Theatre was founded in 2008 by a group of graduates of The London Academy of Music and Dramatic Art (LAMDA) and began as an improvised comedy group. Mischief Theatre performs across the UK and internationally with improvised and original scripted work. Their other production The Comedy About A Bank Robbery is currently at the Criterion Theatre and their acclaimed production of Peter Pan Goes Wrong will return to the Apollo Theatre from 20 October 2016. The company is led by Artistic Director Henry Lewis and Company Director Jonathan Sayer.

Book Tickets for The Play That Goes Wrong at the Duchess Theatre in London’s West End.