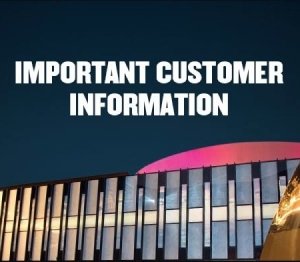 Nottingham Playhouse is releasing a series of videos that will help keep communities in the East Midlands engaged with the arts.

The new posts began with the sharing of the Playhouse’s Mass Bolero video. Celebrating the mass participation event from five years ago, it features over 700 local people recreating Torvill and Dean’s iconic ice skating routine in locations across the city Nottingham. It has been seen by over 90,000 people since its initial release in 2014.

A new release features Alex Patterson, the Playhouse choir’s conductor and Nottingham Cathedral’s music director. In it he guides viewers through vocal warm-ups and a song tutorial, as the Playhouse Choir is unable to meet for the next fortnight. Members of the public are being invited to send in videos of themselves singing the cheerful song Bring me Sunshine, for the Playhouse to share on social media.

The videos follow the outbreak of coronavirus in the UK, which has led to show postponements and the halting of many events and classes groups at the Playhouse. Other digital arts being released include dance tutorials, story-telling, pantomime exclusive and the re-releasing of its podcast episodes.

Martin Berry, Head of Participation for Nottingham Playhouse, said: “At times of hardship and anxiety, our role in enriching the lives of the communities of Nottingham is especially important. Here at Nottingham Playhouse, we are using technology, imagination and creativity to make sure we are still here for everyone.

“From dance tutorials, singing videos, activities for children, competitions and more, we will do all we can to remain faithful to our many communities, to be there for our most vulnerable participants and friends, and to play our vital part in Nottingham’s wellbeing. This is not an easy time for anyone, including the Playhouse, but with support, donations and engagement, we will not only avoid being diminished by this moment in time, but will grow through it and come back stronger than ever.”

Alex Patterson, conductor of the Nottingham Playhouse choir, added: “The Nottingham Playhouse Choir has been a wonderful chance to engage people with the joy of singing; when people walk through the door they have been able to escape the everyday and just take time to be creative. Despite coronavirus, it’s been great to reach out to people digitally and encourage them to sing in the face of hard times. I can’t wait to hear how people are getting on.”

Nottingham Playhouse Trust is a registered charity, and relies on support of the public. At this difficult time, online donations are gratefully received.

The latest news regarding Nottingham Playhouse’s reaction to Covid-16 can be found on its website.

Nottingham Playhouse’s 2018 production of The Madness of George III was one of the first to be broadcast internationally by NT Live from a theatre outside of London and won the Whatsonstage Award for Best Play Revival and Best Supporting Actor in a play (for Adrian Scarborough’s performance as Dr Willis). It has so far been seen by over 50,000 people internationally.

Nottingham Playcast is the Playhouse’s very own podcast. Running for two years it has included interviews with stars such as Mark Gatiss and Sting, with excusive peeks behind the scenes as well. The Playcast can be listened to on Spotify and Apple Podcasts.

Nottingham Playhouse believes theatre should be accessible to all, and runs wide-reaching participation schemes, youth theatres and its Amplify programme – which seeks to inspire and support theatre-makers from the East Midlands.

Nottingham Playhouse Trust Ltd is a registered charity (no. 1109342).