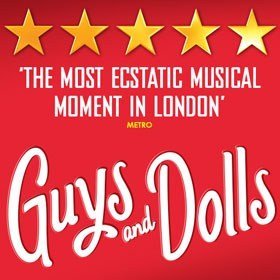 Guys and Dolls have announced today that the award-winning actor Rebel Wilson will be joining the West End cast for a strictly limited 8 weeks at the Phoenix Theatre to play the part of Miss Adelaide from Tuesday 28 June until Sunday 21 August 2016. Guys and Dolls also announces the opening of a new booking period, with tickets now available until 7 January 2017.

Rebel Wilson commented: “A lot of people who know me from my more recent film work have no idea how much theatre has influenced my life. I saw my first musical at age 14, a show called 42ND STREET, after one of my family’s dogs had unsuccessfully auditioned to be in it. It blew me away and I’ve loved musical theatre ever since. Training at the Australian Theatre for Young People gave me the opportunity to perform onstage in 8 productions ranging from new Australian musicals to classic plays. I then went on to write and perform in my own productions before being snapped up to do screen work. I am delighted to be making my West End debut in GUYS & DOLLS and to be playing such an iconic role as ‘Miss Adelaide’ is truly an honor. Hopefully I crush it….but you’ll have to come and see me to find out!”


Rebel Wilson has become one of the film industry’s most recognisable comedic actors since gaining recognition through her role as “Fat Amy” in the multi award winning Pitch Perfect and Pitch Perfect 2 (Universal Pictures). For her performance in Pitch Perfect Rebel received a MTV Movie Award for “Best Breakthrough Performance” and a Teen Choice Award for “Choice Movie Actress: Comedy.”

For her performance in the sequel, Rebel won two MTV Movie Awards for “Best Ensemble Cast” and “Best Kiss” and received a nomination for “Best Comedic Performance,” as well as several Teen Choice Award nominations. She also received a People’s Choice Award nomination for “Favourite Comedic Movie Actress.” Rebel will reprise her iconic role as “Fat Amy” in Pitch Perfect 3 which will be released in the summer of 2017. Rebel made her American comedy film debut in Paul Feig’s Bridesmaids alongside Kirsten Wiig. The film, produced by Judd Apatow, was named one of AFI’s top ten films of 2011 and received a Critics’ Choice Movie Award for “Best Comedy”. Her other film credits include How to be Single, Grimsby, Night at the Museum: Secret of the Tomb, Bachelorette and Ice Age: Continental Drift. Rebel will also make a cameo appearance in Absolutely Fabulous: The Movie, which is released this July. Rebel also has notable history of writing her own material, and in 2013, she hosted and was the Head Writer on the MTV Movie 2 Awards.

She got her start in entertainment writing and performing on Sydney’s stages and on the beloved Australian cult comedy series Pizza. Before moving to the United States, Rebel wrote and starred in two further television series: The Wedge and Bogan Pride, She holds a double degree in Law and Arts (BA/LLB) from the University of New South Wales, and trained as an actor at the Australian Theatre for Young People.

The current cast of Guys and Dolls include Nigel Lindsay as Nathan Detroit and Samantha Spiro as Miss Adelaide who will have their final performance on Saturday 26 June. Further casting will be announced in due course.

Nathan Detroit is desperate: he needs money for an illegal dice game, and he needs it fast. Not to mention a 14-year engagement with nightclub singer Miss Adelaide, whose patience is finally running out. Enter notorious gambler Sky Masterson, a guy who can never turn down a bet, and straight-laced missionary Sarah Brown, a doll with a heart of ice. Nathan’s wager is that Sky has to romance Sarah by taking her to Havana for dinner and in return he’ll provide a dozen ‘sinners’ for Sarah’s mission. Surely this is one bet Nathan absolutely can’t lose?

A joyous and vibrant celebration of Prohibition-era New York, Guys and Dolls first premiered on Broadway in 1950 and captured the optimism and energy of post-World War Two America. This hugely popular and multi award-winning musical, based on the colourful stories by American journalist Damon Runyon renowned for his vivid fictional depictions of the gamblers, hustlers and nightclub singers of New York, features some of Broadway’s greatest musical numbers including ‘My Time of Day’, ‘Luck be a Lady’ and the show-stopping ‘Sit Down You’re Rockin’ the Boat’. Guys and Dolls is directed by Gordon Greenberg with choreography by Cuban dancer and former Royal Ballet star Carlos Acosta and Andrew Wright whose credits include Chichester Festival Theatre’s Singin’ in the Rain.

'Look anyone will tell you, I’m a pretty straight sort of guy.' Tony Blair A reckless reappraisal of the life of former Ugly Rumours front man and … END_OF_DOCUMENT_TOKEN_TO_BE_REPLACED

Michael Harrison and the Really Useful Group are thrilled to announce that The Wizard of Oz, the musical based on the iconic story by L. Frank Baum, … END_OF_DOCUMENT_TOKEN_TO_BE_REPLACED

Following major demand for tickets, the Queen of comedy Dawn French has announced a host of new UK tour dates for her critically acclaimed live … END_OF_DOCUMENT_TOKEN_TO_BE_REPLACED