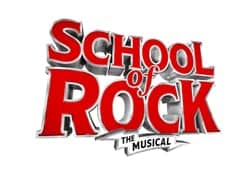 To vote for School of Rock – The Musical which has been nominated for the 2017 Evening Standard Radio 2 Audience Award for Best Musical visit bbc.co.uk/radio 2. Voting closes on 29 October 2017 at 11.59pm and the winner will be announced at the Evening Standard Awards on 3 December 2017.

On 6 November 2017 School of Rock – The Musical will host this year’s BBC Radio 2’s BBC Children in Need Gala. Hosted by Ken Bruce with the charity’s mascot Pudsey, at least 50% of the proceeds from the Gala will go to BBC Children in Need’s 2017 Appeal going on to make a difference to the lives of disadvantaged children and young people across the UK.

Continuing the countrywide search for kids to ‘join the band’, further open auditions will take place in London on 8, 10, 20 and 22 November 2017. If you’re between 8 – 12 years old and play the drums, keys or the electric or bass guitar, registration and further details can be found at www.schoolofrockthemusical.co.uk/opencall or by contacting Jessica Ronane Casting at rock@jessicaronane.com

Now booking to 13 January 2019, School of Rock – The Musical opened in November last year and is one of four Lloyd Webber shows – with Phantom of the Opera, Evita and Jesus Christ Superstar – which have played concurrently in the West End this year. The West End production of School of Rock – The Musical is the recipient of the Olivier Award for Outstanding Achievement in Music, and in August this year, the production welcomed a new group of kids who play live music on stage at each performance.

Before joining the School of Rock company Stephen Leask’s previous theatre credits include Robin Hood at The Egg, Theatre Royal Bath, One Man, Two Guvnors at the Theatre Royal Haymarket, A Little Hotel on the Side for Theatre Royal Bath, Potted Panto at the Vaudeville Theatre, The Secret Garden for Birmingham Rep and Troilus and Cressida for the Royal Shakespeare Company. Leask is a member of the Merely Players, a theatre company dedicated to producing accessible productions of Shakespeare. His television appearances include Nightmares, Doctors, Our World War, The Intern and EastEnders.

Florence Andrews’ West End theatre credits include the role of Glinda in the Really Useful Group’s production of The Wizard of Oz at The London Palladium, Wicked at the Apollo Victoria Theatre and Once The Musical at the Phoenix Theatre. She played the leading role of Candy in Miss Atomic Bomb at the former St. James Theatre as well as A Midsummer Night’s Dream and The Mikado, both at the Stephen Joseph Theatre in Scarborough.

Alan Pearson has recently completed a run in Alice’s Adventures Underground at the Waterloo Vaults. His other theatre credits include One Man, Two Guvnors for the National Theatre, The Mitford Girls at Chichester Festival Theatre, Avenue Q at the Gielgud and Wyndham’s Theatres, Hamlet at the Donmar Warehouse and Jack and the Beanstalk at the Palace Theatre, Watford.

Michelle Francis’ theatre credits include Mack & Mabel and Oklahoma! for Chichester Festival Theatre, Jersey Boys at the Piccadilly Theatre and Prince Edward Theatre, The Importance of Being Earnest at the former St James’ Theatre, Finding Neverland at Leicester Curve and Shrek The Musical at the Theatre Royal, Drury Lane.

Craig Gallivan is best known on television for playing Luke in the British comedy-drama Stella, a role he has played for over 50 episodes. His theatre credits include Billy Elliot The Musical at the Victoria Palace Theatre, Crime and Punishment for the National Theatre, Days of Significance for the Royal Shakespeare Company, The Long, The Short and the Tall for Sheffield Theatres and the UK Tour of Joseph and the Amazing Technicolor Dreamcoat. His other television work includes Torchwood II, Footballers Wives and Footballers Wives: Extra Time.

Based on the iconic hit movie and with a rocking new score by Andrew Lloyd Webber, School of Rock – The Musical follows slacker and wannabe rock star Dewey Finn turn a class of straight-A 10-year-old students into an ear popping, riff scorching, all-conquering rock band! Dewey poses as a substitute teacher at a prestigious prep school to make ends meet, and when he discovers his fifth graders’ musical talents, he enlists his class to form a rock group and conquer the Battle of the Bands. As Dewey falls for the beautiful headmistress, can he and his students keep this special assignment secret as they learn to fully embrace the power of rock?

Based on the smash hit 2003 film of the same title, School of Rock features music from the movie, as well as new music written by Andrew Lloyd Webber with lyrics by Glenn Slater and a book by Julian Fellowes. School of Rock – The Musical is directed by Laurence Connor with choreography by JoAnn M. Hunter, set and costume designs by Anna Louizos, lighting design by Natasha Katz, sound design by Mick Potter, music supervision by John Rigby with Matt Smith as musical director.

Produced by Paramount Pictures, the 2003 hit film School of Rock was directed by Richard Linklater and starred Jack Black in a career-defining performance.

School of Rock — The Musical is produced in the West End by Andrew Lloyd Webber for The Really Useful Group and Warner Music Group & Access Industries with Madeleine Lloyd Webber as Executive Producer.