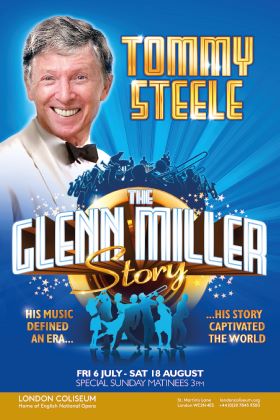 Joining the legendary performer Tommy Steele on stage at the London Coliseum in The Glenn Miller Story this summer is Marti Webb, which will be running for a limited season from 6 July – 18 August 2018.

60 years after making his stage debut at the London Coliseum in 1958 starring in Rogers and Hammerstein’s Cinderella, the celebrated singer and actor Tommy Steele – Britain’s first Rock and Roll star – returns to this prestigious London stage to celebrate his idol Glenn Miller in a new musical production.

Glenn Miller was the best selling recording artist in the world from 1939 to 1943, leading one of the best known big bands. In those four years, he scored 23 number-one hits – more than Elvis Presley and The Beatles.

The Glenn Miller Story features the journey the legendary big band leader took to find his unique sound, and his subsequent fame and untimely death. With the authentic sounds of In the Mood, Moonlight Serenade, Little Brown Jug, Pennsylvania 6-5000, Tuxedo Junction, Chattanooga Choo Choo, and many more era-defining favourites. It is produced by Bill Kenwright with choreography by Olivier Award Winner Bill Deamer and direction by Bob Tomson and Bill Kenwright.

Tommy Steele landed his first UK number-one with Singing the Blues in January 1957, reaching the top spot before Elvis, the same year he filmed The Tommy Steele Story, one of Britain’s great rock ‘n’ roll movies.

His career has included over twenty hit singles, twelve hit musical movies – including Finian’s Rainbow, The Happiest Millionaire, and of course Half A Sixpence – and countless award winning stage musicals such as Half A Sixpence, Hans Andersen and Singin’ in the Rain. Tommy starred in the musical Scrooge, which enjoyed two successful runs at the London Palladium, and made him the theatre’s all-time record-breaking performer, having headlined more performances than any other star in its history.

Autumn Draper’s theatre credits include: Mack and Mabel (Hackney Empire), Once Upon a Time (The Orchard Theatre) and The Wedding Singer (Doreen Bird Foundation Theatre). Autumn’s screen credits include: The X Factor Final. Other credits include: NFL Pre-Game Entertainment (Twickenham Stadium) and Move It (London Excel).

Devon McKenzie-Smith’s theatre credits include: Hairspray (UK Tour and Cologne, Germany), West Side Story (UK Tour) and Memphis (Shaftesbury Theatre). Devon’s screen credits include: The Royal Variety Performance, The Olympics Opening Ceremony, The One Show, The Olivier Awards, Ant and Dec’s Saturday Night Takeaway, The Jonathan Ross Show with Motown the Musical and The X Factor with Motown the Musical.

THE PRINCE OF EGYPT, the hit musical based on the classic DreamWorks Animation film, is proud to confirm the complete cast, orchestra and company of … END_OF_DOCUMENT_TOKEN_TO_BE_REPLACED

Tom loves a laugh! But it’s no joke when he can’t even remember where he’s parked the car... Fortunately, his loving wife Trish comes to the … END_OF_DOCUMENT_TOKEN_TO_BE_REPLACED

Following a sell-out tour in 2018/2019, the producers of the smash-hit ROCK OF AGES are delighted to announce the cast and Kevin Clifton’s return in … END_OF_DOCUMENT_TOKEN_TO_BE_REPLACED

The classic tale of The Three Musketeers is brought to you by the inconceivable, unimaginable and fantastical FoolHardy Theatre… a company with … END_OF_DOCUMENT_TOKEN_TO_BE_REPLACED