It has a cult following, it has legendary status and boasts that highly desirable cachet of Royal Approval: Prince Charles rates The Goon Show as his all-time favourite.

What is it’s USP? Well, to be honest, it has many but the stand-out surely has to be the sparky, eccentric, spontaneous, quirky and enduring humour of Spike Milligan’s evergreen scripts. There were 243 of them, performed on radio, between 1951 and 1961 and now, to the unbridled delight of Goon-aficionados the world over, there is to be a stage adaptation touring up and down the land at 32 venues this autumn.

I say “ adaptation” but there are two points about that. Director Julian Howard McDowell, whose brainchild this is, tells me that the show uses just three of the original episodes and they are performed just as Spike wrote them: no additions, no changes, no pandering to modern tastes in humour and no strait-jacketed strictures of political correctness. In the sequence the cast performed at the launch in the Museum of Comedy, for example, an old buffer wanders around a Sussex beach with an elephant gun. “You can’t shoot elephants in England” he is informed. “Why not?”. “Because they’re not in season”. This particular sequence doesn’t feature in the show but you can imagine the furore of faux outrage by the Twitterati it would cause. Spike never knew Twitter of course but I think he would have loved it.

The second point is that The Goon Show was written for radio but with a studio audience – something that Spike was insistent on, a non-negotiable. For that reason – something that seems incomprehensible today – the BBC
rejected it. It was only through the dogged determination of producer Pat Dixon that the powers-that-were eventually relented and it was recorded. 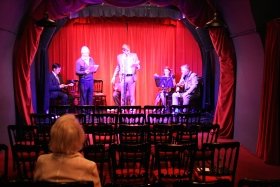 Thus it is not only absolutely right that the show translates easily to the stage but further underlines the point that Spike’s script requires no amendment. McDowell reprises the roles of Peter Sellers from the original broadcasts while Colin Elmer is Spike Milligan (having previously played Kenneth Williams in the stage show of Round the Horne). Harry Secombe is played by Harry Secombe look-a-like Clive Greenwood – he has Secombe down to a T but I don’t know if he can sing as well as Harry. The quartet is made up with Tom Casper as Wallace Greenslade, the long-suffering, dead-pan, best-BBC-voiced announcer, a kind of tent-peg who tried to instil a modicum of stability whilst the others flailed hilariously around in the tornado of jokes and japes and silly voices and zany characters around him. The original announcer, so legend has it, left to be replaced by Greenslade because he was driven completely scatty by the oddball antics of the rest of the cast. Greenslade survived to become an integral part of the legend.

The show is presented by Apollo Theatre who have sensibly brought in Norma Farnes as producer. Norma was Spike’s assistant and manager for 35 years and she points out that 2018 is the centenary of Spike’s birth – he died in 2002. Norma tells us that despite his prolific output after The Goon Show had finished – books, poems, TV work – he always confided in her that it all meant nothing: “When I die they’ll say Spike Milligan who wrote The Goon
Show died today”. Maybe – but it’s interesting to note that his poem “On The Ning Nang Nong” is repeatedly voted My Favourite Poem by generations of children who never knew The Goon Show.

Sound effects are crucial to any radio show and these will be created, on stage, by the sparkling and good-natured banter-musos Java Jive, a duo who also supply musical accompaniments, interludes, play-ins and play-outs.
Their dulcet tones and gentle rhythms, using guitar, fiddle and imaginary trumpet – as well as their soothingly mellifluous voices and quizzically raised eyebrows – provide a charming counterpoint to the manic goings-on around them.

One other little quirky titbit: the stuffy old BBC originally referred to the show as the “ Go On Show” – not wanting to upset people as “goon” was a slang word for Germans during the recently finished war – seems like political correctness was rearing it’s ugly head even before it was invented! The compromise was to call the first series “Crazy People”. But due to its popularity, and probably because Spike invariably got his own way, it was changed to “The Goon Show” for series two.

So if you grew up in the ’fifties with your ear glued to the wireless, or you’ve watched grainy footage on YouTube or you just want to know what all the fuss is about, The Goon Show on stage is coming your way. You can indulge in nostalgia to your heart’s content but do make sure you take the kids as, believe me, they’ll find it even funnier than you do.

If you like comedy and you are interested in its rich heritage then do make the trip to the Museum of Comedy which is a fascinating exploration of British Humour. It has its own little performance space where stand-up is performed regularly and is well worth a visit – situated in Bloomsbury Way, in the crypt of St. George’s Church.

*The final performance at the Leicester Square Theatre will be a special gala performance, at which The Goons will be joined on stage by Strictly Come Dancing star, Lance Ellington, son of original Goon Show band leader, Ray Ellington, and his band. There will also be a post-show Q&A session featuring a panel of special guests.

New dates are announced today for the return of Agatha Christie’s Witness for the Prosecution at London County Hall on the Southbank. As the … END_OF_DOCUMENT_TOKEN_TO_BE_REPLACED

5North and Ellie Keel Productions’ Written on the Waves, a series of world premiere audio plays – the penultimate play, and first for a family … END_OF_DOCUMENT_TOKEN_TO_BE_REPLACED

Sonia Friedman Productions announces the dates for the RE:EMERGE season as priority booking opens on 15 April at 10.30am, with public booking opening … END_OF_DOCUMENT_TOKEN_TO_BE_REPLACED