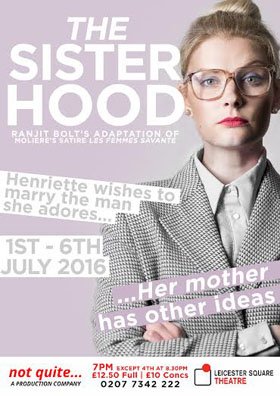 “Henriette just wishes to marry the man she loves… her mother has other ideas.”

Not Quite… is proud to announce its premiere production of the The Sisterhood – a satirical comedy by Ranjit Bolt, one of Britain’s leading translators for stage. The production will be held at the Leicester Square Theatre lounge for a limited run from Friday 1st – Wednesday 6th July 2016.

Not Quite… is a production company that was founded in 2015 by Richard Swann and Jamie Scott-Smith.

Henriette wishes to marry the man she adores. Is that so much to ask?
Apparently so for this trio; her overbearing matriarchal mother; her intellectual, sexless sister and her downright randy aunt. These “learned ladies” have quite the different suitor in mind in the shape of a pompous, bombastic and self-proclaimed ‘genius’ of poetry.

Her downtrodden father is adamant to support Henriette in her choice of husband and so the war begins in hilarious and ridiculous fashion.

Set in a lavish Paris salon during the late 1980’s, ‘The Sisterhood’ is Ranjit Bolt’s adaptation of Molière’s classic satire, ‘Les Femmes Savantes’.

This fast-paced and intelligent comedy, satirising a family of pseudo-intellectual pontificating women, will keep you laughing throughout!

not quite PRESENTS: THE SISTERHOOD
Written by Ranjit Bolt | Adaptation from an original text by Moliere
Directed by Katherine Napier

Following its multiple West End runs, and continuing success at its home – The Other Palace, Heathers the Musical will embark on its highly … END_OF_DOCUMENT_TOKEN_TO_BE_REPLACED

After creating the “absorbing and provocative” Version 2.0 and the “eminently lovable” Letters, Kashyap Raja returns to London with his new play Earth … END_OF_DOCUMENT_TOKEN_TO_BE_REPLACED