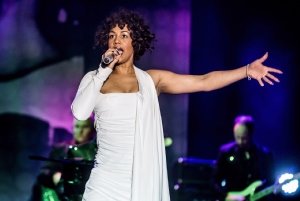 Box office staff at the Adelphi Theatre are contacting ticket holders so they can transfer their tickets to the new date.

Whitney – Queen Of The Night stars Elesha Paul Moses (What’s Love Got To Do With It?, The Voice, The X Factor) in the title role, and features a stunning live band and backing singers.
Tickets are on sale from www.cuffeandtaylor.com

The outstanding concert production made its West End debut last year with a string of sell-out shows at the Savoy Theatre. During the past four years, Whitney – Queen Of The Night has toured extensively across the UK, and to Europe and Brazil.

Fans will be blown away by three decades of nostalgic hits, including I Wanna Dance With Somebody, Higher Love, One Moment in Time, I’m Every Woman, How Will I Know, The Greatest Love Of All, I Will Always Love You and many more.

Speaking about the return to the West End, Elesha said: “Whitney Houston is one of the greatest singers of all time, and for me to lead this cast, singing these songs as part of this phenomenal show is a dream come true. We are all thrilled to be bringing the show back to the West End and cannot wait to perform at the magnificent Adelphi Theatre.”

Ben Hatton, Director of Theatre Touring for promoters Cuffe and Taylor, added: “We are delighted to be bringing Whitney – Queen Of The Night back to the West End and to the Adelphi Theatre.

“The show received rave reviews on its West End debut, from both critics and the audience alike, and people just love to hear those amazing vocals being recreated live on stage.

“Audiences across the country love this stunning show, so if you Wanna Dance With Somebody, we can’t wait to see you there.”

Before her death in 2012, Whitney Houston had been hailed as the most awarded artist of all time, by Guinness World Records – with six Grammy Awards and 30 Billboard Music Awards among her 415 titles. This year she is to be inducted into the Rock And Roll Hall Of Fame, securing her place at the first nomination.

Currently home to musical Waitress, the Adelphi formerly hosted the original West End production of The Bodyguard – the stage adaptation of the hit film in which Whitney Houston starred as a world-renowned singer.

Whitney – Queen Of The Night is an unmissable evening paying homage to one of the best-selling music artists of all time, with a sensational cast.

Andrew Lloyd Webber’s The Phantom of the Opera has returned to its home, Her Majesty’s Theatre London. Experience the thrill of the West End’s most … END_OF_DOCUMENT_TOKEN_TO_BE_REPLACED

The full cast is announced today for the 40th Anniversary tour of Michael Frayn’s multi-award-winning farce, Noises Off, which will open at Theatre … END_OF_DOCUMENT_TOKEN_TO_BE_REPLACED

Adapted from Susan Hill’s classic book, The Woman in Black at the Fortune Theatre has been thrilling London audiences since 1989. In The Woman … END_OF_DOCUMENT_TOKEN_TO_BE_REPLACED

The producers of the multi-award-winning, critically acclaimed production of CABARET at the KIT KAT CLUB in London’s West End are thrilled to announce … END_OF_DOCUMENT_TOKEN_TO_BE_REPLACED