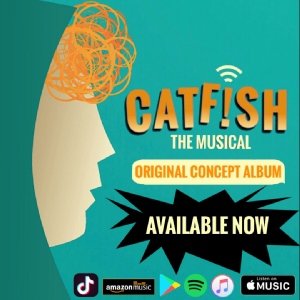 At a macro level, Catfish The Musical is a story about someone who didn’t seek to correct an error immediately, even if there was no malicious intent in the said error, only to try to ride it out. This results in consequences that would have never occurred if they had just tried to speak up in the first place. But there is, at least, a sense of perspective here, and the last couple of musical numbers in this original concept album, in particular, seek to make clear that while people may have been affected by what was quite literally a schoolboy error, this is hardly End of Days.

The musical styles are varied, with strong and enthusiastic opening and closing numbers, though most of the songs are firmly and undeniably ‘musical theatre’. This is no bad thing, of course, as there’s nothing like a soloist, several characters, or indeed the full cast going all out with lively energy. The harmonies in ‘Butterflies’ are particularly noteworthy, but throughout, the lead voices are quite exquisite, and the album is, as a whole, a pleasant listening experience.

The wordiness in the opening number reminded your reviewer of the sort of lyrics composed by Stephen Sondheim. This is, however, very much a storyline that deals with contemporary issues facing youngsters today, reflected in some of the vocabulary used. I found myself, for instance, looking up what on earth ‘Let’s Get Sickening’ meant (apparently it is to style yourself so as to look so stunning and beautiful that people will wish to vomit at the sight of you). The choice that Jackson (Harry Simpson) makes when it comes to online or offline dating is hardly surprising.

There are a few gaps in the narrative, which I assume are filled by spoken word sections not included in the album. Some of the inherent dangers of the ubiquity of social media are strongly highlighted, especially in the words of a character named only as The Victim’s Mother (Jackie Pulford), who expresses significant regret that The Victim (Zac Hanlon) did not receive medical assistance in a more timely fashion because more bystanders to a tragic incident were more interested in filming what was happening instead of calling the emergency services.

This early critical incident, then, came across to me as more impactful than the whole ‘who are you really?’ scenario being played out throughout most of the rest of the album – one of the musical numbers is called ‘I Got A NUDE’: an entire song about the receipt of pictures of someone not wearing anything. Thankfully though, moments, when one is waiting for a song to finish, are rare.

This musical crams in the rhyming couplets, too, which I couldn’t help noticing. I’d supply examples but that may be giving a tad too much away. Anyway, Jackson’s ideas of romance are sometimes mildly amusing – in ‘Dating Profile’ he references Nando’s at least three times (is he really not any more ambitious than that?). The story’s conclusions are not exactly ground-breaking: good triumphs over evil and the truth wins out.

The ending is (perhaps deliberately) open-ended, which is fine, inasmuch as there have been too many musicals over the years that tie loose ends up too neatly to force a definitive ending. An engaging and refreshing album, this is an achievement that the creative team should be pleased with. I would be interested in seeing a full production at some point in the (hopefully near) future. A worthy addition to any musical theatre lover’s collection of recordings.

Catfish follows the story of the four friends Jackson, DD, Alex and Will. After a debate about which has more impact: old or new school romance, Jackson is convinced to join a new dating app, Anonymous. It is here where he is matched with the no-nonsense taking, extroverted Jessica. After light banter and instant chemistry, Jackson soon realises Jessica belives he is a girl after a mistake on his dating profile. He has the option to clear up this honest mistake or play a game…