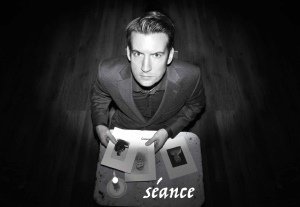 As Halloween approaches, theatrical thoughts turn from jazz hands to zombie hands and there is suddenly a plethora of horror and ghost related events appearing in theatre-land. Not least among these is Séance: Conversations in the Dark and I was lucky enough to catch up with the production’s host, Christopher Howell.  I started by asking Christopher to give me a spoiler free overview of the event.

CH: The premise of a séance is to reach out to the dead in hope of a reply or at least a sign that they’re with us. What fascinates me about séances is that people tend to go for two very different reasons. Some go to be comforted in the hope of knowing there’s a way to connect with those who are no longer with us. And the rest go to be terrified because of the same exact idea. This show scratches the itch of both desires.

TE: You say that the show came about from your childhood memories of night terrors.  What sort of things happened in them and what was their effect on you both at the time and looking back now?
CH: To avoid spoilers I’ll leave the details of what happened in my night terrors for those who come to see the show. What I can say though is that my night terrors overcame me like a supernatural force. My eyes were always open and my body was fully awake while I lived out surfacing horrific fears in my mind. For family or friends who saw me experience one it was equally terrifying. I literally acted out my nightmares in real time. To anyone on the outside it was like watching fear incarnate.

TE: Would you say you were using this show to help you get closure on your childhood sufferings?
CH: It wasn’t the purpose of the show but by surprise it has been therapeutic somehow to retell those stories that have been trapped in my memories all these years. It’s not exactly dinner conversation.

TE: So just how interactive will the event be?
CH: The audience committee is central to each event. I literally cannot conduct the experience without the audience’s assistance and input. The goal will be to have the spirits reach out to the audience through me acting as the medium.

TE: This may sound daft but talking to my mother about this show, she told me not to go and issued dire warnings about what happens when you mess with the occult.  Does that worry you at all?
CH: I’m not worried, but I’m curious to hear what she thinks about what happens with these things…

TE: In 2016, I reviewed an immersive horror show called 139 Copeland Road, which absolutely terrified me at the time and three years later I can remember virtually everything that happened.  Is that the effect you are hoping for with Séance?
CH: I’m not trying to terrify people although I know regardless many will be terrified. Things will happen that could be put down to supernatural intervention and that conjures up excitement for some and horror for others. But beyond this aspect, there are lots of question built into the experience that I want people to go away thinking about.

TE: You’ve picked a very unusual location to host the event. Why was this and how do you think it will add to the audience experience?
CH: Yes The Asylum in candlelight is a haunting place. I thought a deconsecrated chapel would be the perfect space to focus our energies for the purposes of the séance. When the space for a séance is evocative like this one, the audience can more easily invest in the experience.

TE: Tell me about Mr Poe and his connection to the show?
CH: Edgar Allen Poe’s poems were an inspiration to me while putting this experience together. At a crucial moment in the ceremony I will recite his words in the darkness. That should do a good job of inviting any interested spirits to join us.

TE: It strikes me that this is an event that could work pretty much all year round – certainly autumn/winter.  Do you think that holding it so close to Halloween will add to the overall atmosphere?
CH: For sure a séance can happen any time of year but it’s perfect at Halloween. Stories say at this time of year he spirits of the dead come back to pay visit to the living so this time of year it should be much easier for something memorable to happen.

TE: Séance is a rather unusual show in its nature, how did you get it from being a concept in your head to finally being ready to put on?
CH: There are a lot of elements to bring together in a séance. Given the experimental nature of every encounter, I wanted to have a clear storyline to carry the attention of the audience as well. My creative process was a matter of finding connections between that storyline and the experimental elements. After that, I’ve been presenting the experience for test audiences so it’s ready for opening night at The Asylum.

TE: Given that you are a professional magician, can we expect magical effects in the show?
CH: So to not give away the surprises of the journey, I’d say the best expectations to have are to be ready to listen, feel and open up for whatever lies in store.

TE: So, what drew you to magic?
CH: When I was a boy my family went to see David Copperfield at a massive fair in Michigan. He performed on an outdoor covered stage. It made such a big impression on me that I can still see parts of that show in my mind like a movie I’ve watched a hundred times. After that show, practically the only thing on my birthday and Christmas lists were new magic and books to learn as much as I could.

TE: I love magic.  Even if I can work out how a trick was performed, I am still mesmerised by the whole concept.  The earliest reported magic trick (the ‘cup and balls’ trick) is almost 5,000 years old (2,700 BC) by Dedi in ancient Egypt and throughout history, magic has been there. Why do you think people are so fascinated by it?
CH: I think magic taps into desires of the human condition. Imagine what it would be like to change something in the world by a click of your fingers, to instantly transform something about yourself, to appear somewhere else, to know what people are thinking, or to be invincible and escape difficult situations. We’ve all yearned for and imagined these things. Magic’s wonder continues to capture us because it makes all these things appear to be possible. What would you do if you had magical powers for a day? For sure you have some good answers.

TE: Do you think shows like “Beauty and the Beast” and “Harry Potter and the Cursed Child” both of which use practical magic, help keep the interest going?
CH: I love magic when it’s used to tell a story. That’s a big part of what I’m doing in my new séance show as well. And for sure when magic is combined with imagination and storytelling in these ways it feeds the public’s interest in magic performance.

TE: Who would you say is/are your hero/s of magic?
CH: There are so many people in the magic world that I admire for different reasons. One of my biggest inspirations was Eugene Burger who was also a mentor of mine who passed away in 2017. He was a legendary Chicago-based magician who also was a specialist in spirit theatre. Obviously for my séance show his presence will be felt. And who knows, maybe he’ll be even pay us a visit?

TE: You probably won’t be able to answer this one, but how do you get into the Magic Circle?
CH: Let’s leave that a mystery.

And with that, our time was up and like the shopkeeper from Mr Benn, Christopher disappeared to play with the minds of the theatre-going public once more – and personally I can’t wait.

Nightmares and phantom legends form the backdrop of this new interactive séance show presented in one of London’s most haunting venues. The participants in each audience invite the spirits into the space to share their wisdom, exorcise their demons or complete their unfinished business. The only thing for sure is that anything could happen.

Driven by memories of night terrors as a boy, Christopher Howell’s show takes a haunting look at what lures us to séances. As we flirt with the supernatural, do we seek comfort in reaching out to loved ones who have passed? Or do we crave the raw fear of a ghostly encounter?

Learn more about Christopher at
http://christopherhowell.net