You are here: Home / Interviews / Interview with Kheira Bey – Voices From The Deep 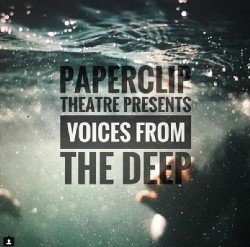 Kheira Bey is in the female-led production called Voices From The Deep at the King’s Head Theatre in May, as part of the ‘Who Run The World’ festival of new writing. This involves Kheira Bey in a one-woman play – Voices From The Deep, which is a night of shorts set in Shakespearean verse that blends comedy, satire, heart-wrenching drama and cheeky penmanship into one. What to expect: saucy letter writing, heat rash, a few unexpected twists on history, and a hot arid desert. We witness women from the four corners of the globe navigating lives faced with hostility, violence, sexual intrigue and sometimes, plain boredom. Paperclip Theatre is made up of 12 women who create theatre that breaks the mould; using comedy to highlight inequality, bringing real women to life, and embracing unconventional female stories to challenge conventional narratives.

Q: Who are Paperclip Theatre and how do you fit in?
Kheira: Paperclip Theatre is made up of 12 women who create theatre that breaks the mould; using comedy to highlight inequality, bringing real women to life, and embracing unconventional female stories to challenge conventional narratives. Paperclip founder Adriana Sanford is an exciting, young female director who has finished an acclaimed run at Vault Festival. I’m part of the story-telling process as an actor.

Q: Can you give us an insight into Voices from the Deep? How did it start, and then evolve to where it is now?
Kheira: The overall concept of Voices from the Deep was created by Adriana Sanford, the founder and Director of Paperclip Theatre – the company producing the show. The idea was to put female voices from history that hadn’t been heard, for various reasons, into the classical verse form of Shakespeare. Voices creates an alternate suite of short “History Plays” linked by being female characters (as well as being written, directed, and performed by women) and also linked by the iambic pentameter, tetrameter, and trimeter verse rhythms adopted by the writers of the individual pieces. Paperclip Theatre is made up of a core of about half a dozen founding writer members who create the company’s content. Adriana put out the call, and Verity (Fine Hosken), Rachel (Archer) and Samia (Djilli) came back with ideas for plays that could fit into the overall structure Adriana had in mind. These took the brief and ran with it, taking it into diverse territories in space and time, from 1870s Algeria, to 1560s England and Scotland, to 1880s India. The fourth play came in via email submission. Helen Cooper’s wonderful play Argent, which will close the show, found its way to Paperclip thanks to Bossy.com. The writers also drew on Paperclips actress members to read, workshop, and test out material. So there was a bit of evolution of the individual scripts that happened there. It’s vitally important to Paperclip as a company to foster collaboration between female writers, directors, and performers.

Q: What is at the heart of the production?
Kheira: Real female stories and experiences, which London audiences have been starved of. The Shakespearean prose beautifully intertwines our four stories, through different time periods and countries. Throughout multiple different themes explored such as violence, identity and boredom, the beauty of story-telling runs throughout. The whole night is experimental in style, with a boldness to turn as many artistic risks as possible! If you’re looking for a play about menstruation, pregnancy or domesticity – look elsewhere.

Q: How does it feel to be in a one-woman production and not have anyone to work with onstage?
Kheira: It’s the same feelings I would normally have before a show, think doing your GCSE Chemistry exam. Nerves, scared, excited, curious. I’ve never done a one-woman production before, so it is very exposing. I have control over everything, which can be very fun indeed. Everything is quite carefully blocked and I’ve been so locked in Suad’s mind, that it’s really all down to the audience and what they make of it. Theatre is simply an actor, an audience, a venue.

Q: Why should everyone get along to see Voices From the Deep?
Kheira: Queen Elizabeth I of England and Mary, Queen of France and Scotland face off. Not for an ordinary battle – a lip sync battle.

I think the beautiful Shakespearean prose, which continues throughout four totally different stories, time periods and countries. It really is a joy to indulge in these words when I am performing them. Samia Djilli, who has written ‘Middle Ground’ of which I play Suad within, is a very talented upcoming playwright. Last month she had a showcase at the Royal Court Theatre. When watching I think it’s quite easy to get swept away by the flow of the meter, but when we take a pause, the reality hits very brutally. Perhaps the romantic poetry of the text conceals the hidden darkness, inequality and oppression underneath.

Voices From The Deep
King’s Head Theatre
7th May 2018
http://www.kingsheadtheatre.com/