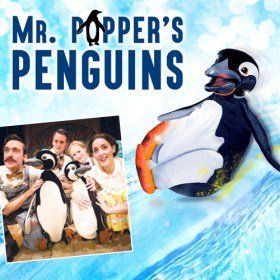 Welcome to Stillwater. The town where everyone will fit in, including Mr Popper, a painter and decorator, who wants to go on adventures and dreams of going to see all of the favourite places in the books he reads.

He imagines getting closer to the summit, with each step he climbs up the ladder while he holds a paint brush in his hand, he imagines traversing snowy landscapes while white sheets are being shaken in the background. His conversations over the radio with the famous explorer, Admiral Drake lands him with a gift, a crate on his doorstep, it’s umm… a penguin – Hello Captain Cook!

Somehow from one penguin, there are two, and then suddenly there are twelve. With a cast of four, it is very impressive how they embrace and deliver all the roles, including those of the penguins, along with providing supporting penguin sound effects. It is a work of art and for this reason, you’d be forgiven not to notice that there are not always twelve penguins waddling around the stage.

How will Mr and Mrs Popper manage their new big family in their small home in Stillwater? Oh, the chaos, the spiralling family expenses and all of its implications. The penguins try to gobble the fish, they poke bottoms and struggle to conform to the house rules. Does Mr Popper send the penguins to London Zoo to live or can they stay at 342 Crownfield Avenue with Mr and Mrs Popper, or maybe, just maybe, he has an idea. Can these captivating performing penguins be the showstopper, in Mr Greenbaum’s opinion? Or is this just another dream?

Will Mr Popper stay here in the town that he was born in, safe where everyone knows his name, or will his dreams with his penguins lead him to a bigger and bolder adventure?

There is music, there are songs, there are great voices but it is the puppetry and the penguin sound effects that keeps the audience’s attention in this light-hearted 55-minute play, which is based on the novel by Richard and Florence Atwater, Mr Popper’s Penguins. There is a nice little surprise at the end of the play that the younger audience will just love and also an audience participated penguin dance. A great family show, especially for those families with very young children. Well done to Pins and Needles Productions in meeting the challenge of bringing penguins to life with such a small cast and the cast for delivering it.

Direct from a New York City season!
Mr & Mrs Popper and their amazing family of performing penguins make their West End debut at the Criterion this Christmas.

Painter and decorator by day, Mr Popper spends his time dreaming of Antarctic adventures. He is astounded when one day a packing crate arrives on his doorstep, out of which waddles a penguin! With songs, puppets and a family of performing penguins, this delightful musical adaptation of Richard and Florence Atwater’s popular book (also made into a Hollywood film starring Jim Carrey) is brought to you by the producers of The Tiger Who Came to Tea and We’re Going on a Bear Hunt.