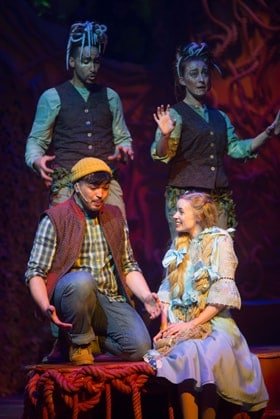 Here I am at The Rayne Theatre at Chickenshed, reviewing a preview of ‘A New Musical Rapunzel’. This traditional story has been turned on its head and something a bit different has been created.

In a large attic of a house on the outskirts of London, Hazel (played by Cerys Lambert) along with six children fall asleep reading fairy tales. Suddenly they are in Hazel’s wonderful and frightening dream, where she is Rapunzel. She is locked in a tower in the magical woods and is desperate to be freed. The six children search high and low for her. But the task of finding her proves difficult as Gothel (the witch) makes the tower disappear and reappear somewhere else in the woods. A simple rusty brown leafy curtain hides the tower on the stage. A prince is absent in this play, instead there is a young woodsman called Henry.

The magical woods is filled with interesting creatures, like the underground gnomes, sleeping fairies, spiders and more. The gnomes are simply dressed with their red hats and pinky red wellington boots. The spiders wear black jeans and red belts. Nothing glitzy or special about any of the costumes but they are adequately suitable for the magical woods. There is quite a bit of dancing to some lovely music and great catchy drum beats, no recognisable songs though, however very pleasant.

This production has an extremely large cast, around 800 people! I do believe that there is a rotating cast for most of the roles, but even so, it is a big cast. The cast is made up of young people, ages ranging from very young children to young adults, all with varying skills and physical abilities.

With an extremely large cast, there is lots happening on the stage at any one time, making it a bit challenging to follow. King Philip (Michael Bossisse), Queen Aramynta (Sarah Connolly), Gothel – the witch (Gemilla Shamruk), Henry (Philip Rothery) and Rapunzel (Cerys Lambert) are the main singers in this play and their voices supported the roles they played in this musical. And with this in mind, one is forgiving for the few notes that were sang off key or the words that were forgotten when sung by other cast members.

I was a bit blown away with the Sign Language Interpreters (Loren Jacobs and Belinda McGuirk) and the energy that they brought with them. The signing is incorporated into the play rather than being the standard sign language ‘add on’. This was truly theatrical signing at its best – it put a smile on my face.

With that said, this is certainly an inclusive theatre allowing young people an important and very valuable opportunity to come together from diverse backgrounds and produce theatre. There is a great sense of satisfaction when you consider what has been achieved with the challenges such as a large young diverse cast.

If there was one piece of advice I was to give, it would be to watch this play with an open mind and not expect the traditional Rapunzel story.

Rapunzel, as you’ve never seen her before!
Chickenshed is delighted to present a new and exciting musical version of the well-loved fairy tale, Rapunzel this Christmas. Mysterious, romantic and life-affirming, this will be a dramatic re-telling of a story you thought you knew!
Rapunzel has little memory of her life before the tower, but yearns to be free. The woods that surround the tower are full of fantastic and astounding creatures – and while Rapunzel’s famous long hair may give her incredible abilities, she learns that her true strength comes from within. Strength which she may need sooner than she thinks, as some unexpected strangers are about to arrive unannounced…!
Featuring Chickenshed’s famously large and amazingly diverse cast, this magical, musical and mysterious version of Rapunzel will dazzle and delight children and adults alike.

Review is from a preview performance.