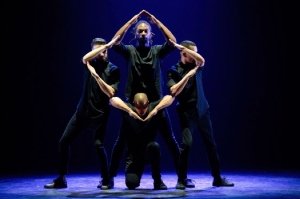 Sampled at Sadler’s Wells is always fun. Short bursts of different genres of dance performed to different styles of music equates energy. It’s not for children but the format suits their attention spans and they come, dressed in glitter and audibly expressing their enjoyment. It’s not a staid experience.

It is an occasion when extracts of some of the work that will be shown at Sadler’s and the Peacock during the forthcoming year are available to be tried to see if the various forms will be enjoyed without too much investment in terms of time and the price of a ticket.

The energy of the evening was introduced at the start with the autodidactic running French collective company (La) Horde. They performed their work To Da Bone, raising engagement through continual movement about the part the new media can have in mobilising crowds and creating opposition movements. They’re a group who don’t stop moving even while standing still.

One of the highlights was Living Archive directed by Wayne McGregor and choreographed by him along with the dancers from his company. He’s using technology again, this time in collaboration with the Google Arts and Culture Lab. Having stored his back choreographic catalogue in video he’s developed an artificially choreographic tool to suggest original possibilities to any new movement phrase that’s created.

His work is never narrative, he leaves what it is to the interpretation of our brains. Finding our individual but also generic human response to art originating from artificial intelligence. An experiment that reveals who we are.

The music, Swarming Seas by GAIKA, vibrated in the auditorium engaging with that sense as well as sight and sound, the dancing was sharp making this extract fine and resonant.

Also resonant was the performance by Max Revell with choreography by Dickson Mbi, a renowned dancer in hip hop dance. Against a background of stars Revell described with the assistance of two tied elasticated bands the universal mortal tragedy of our daily confinement in infinite space.

Shree Savani is a Bharatanatyam dancer from Kalakshetra who is attending the University of Birmingham. Her dances draw on Shakti which is the power of the female depicted in Hinduism in the form of goddesses. Some of her dances go back three thousand years and it is enlightening to see them describe women not as fragile and delicate but beings of immense power.

The poetry, humour and amazement of circus acrobatics was brought by Machine de Cirque, a very likeable bunch of performers. What can be done with a sea-saw! Enjoyed by adults and children alike.

The tangos performed by Ezequiel Lopez and Camila Alegre were exhilarating and joyous with many fine lines.

Botid Seva’s BLKDOG about disconnection and connection, age and lost youth by way of amorphous forms is intriguing, the piece won an Olivier award.

Labora, performed by the five-dancer French hip hop company, Geometrie Variable showed what can be found within bare arms among black.

This show was performed by talented performers from, what is now, old Europe on the eve of Brexit. There was no better place to be on that cusp as these talented performers and choreographers broke through conventions of the past to the excitement and joy the artistic contemporary together.

Sadler’s Wells starts the new year with the return of its dance taster festival, Sadler’s Wells Sampled, on Friday 31 January & Saturday 1 February 2020. Featuring a range of world-class dance, foyer activities and live DJs, the festival gives audiences a chance to experience the broad range of dance presented at Sadler’s Wells at affordable prices, with proms style standing tickets available for just £5, and all other tickets at £20.

A regular fixture at Sadler’s Wells since 2007, Sampled features an assortment of dance genres from a selection of artists and companies.