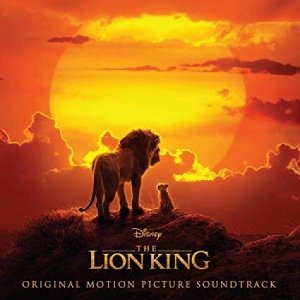 Disney’s The Lion King has an enduring popularity amongst theatregoers in the West End, playing at the Lyceum Theatre since 1999, and on Broadway since 1997. Before that, of course, there was the 1994 animated motion picture and now in 2019 a ‘live action’ remake has done very well at the movie box office. It is, perhaps inevitably, a chance to rethink and shake things up a bit, and there are just as inevitably people who are going to be dismissive of what they see as unnecessary changes or diversions from the previous film that they hold much affection for.

I start with ‘Spirit’, sung by Nala (Beyoncé Knowles-Carter), simply because it isn’t generally available for streaming – well, it is, but I had to stray from Amazon Music to YouTube to hear it. In a way, it’s standard chart music fare – “Watch the light lift your heart up / Burn your flame through the night” is a good example of the sort of lyric that features in the tune. I’m not exactly sure what it means, but one shouldn’t be too overanalytical over the words: the whole thing has a positive vibe about it.

The album kicks off with ‘Circle of Life’, which as almost everyone knows begins with a Zulu chant that starts, “Nants ingonyama bagithi baba / Sithi uhm ingonyama”. Fortunately or unfortunately, this version has no surprises to anyone familiar with it. Nine tracks have no lyrics at all, aside from choral chants: overall, these are mostly atmospheric, at least from the perspective of listening to them as standalone tracks. Between them, they run through a wide range of emotions, from the (pretty much) self-explanatory, and eerie ‘Elephant Graveyard’ to the celebratory ‘Simba is Alive!’, these are orchestral tunes that have a majestic splendour, which make them an utter pleasure to listen to. Jauntier numbers like ‘Hakuna Matata’ come across as much needed lighter moments away from all the JD McCrary’s Cub Simba is sprightly and confident in ‘I Just Can’t Wait To Be King’, while Chiwetel Ejiofor’s Scar is so much of a stereotypical antagonist that, without giving too much away, one almost feels like booing the character even though this is far from a pantomime. There’s a good variety in the length of the tunes, too – ‘The Lion Sleeps Tonight’ is an all-too-brief 84 seconds, while ‘Battle for Pride Rock’ goes on for eleven minutes, not that one would necessarily notice the latter when watching the movie with all its special effects and scenery.

The appeal is broad for good reason – there are near-universal themes about coming of age, dealing with difficult situations and personalities, and having to co-exist with all other living creatures – very much indeed the ‘circle of life’. But ‘Can You Feel The Love Tonight?’ is not a tune I’m keen on in this version: perhaps I am too much of a traditionalist, but there are too many riffs and a rather unbalanced harmony going on. As for ‘Never Too Late’, I found it difficult to warm to it – it’s joyous and enthusiastic, but I can see why it’s included in the end credits and not incorporated in the movie proper. At the risk of sounding uncouth, it’s the sort of track that encourages audiences to vacate the auditorium and allow the cinema’s staff to prepare the screen for the next screening.

The new additions (compared to the 1994 version) do not, in the end, add very much, but the album overall is decent and slick. Maybe, just maybe, an opportunity was missed to make more changes, but on balance the creatives were right not to reinvent the wheel.