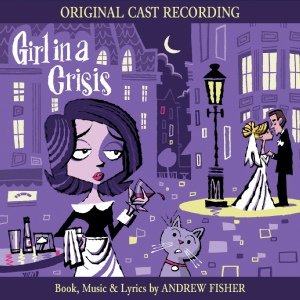 It’s a title that almost screams ‘First World Problems’: Girl In A Crisis. Flic (Lorna Want) is really a young lady rather than the dictionary definition of ‘girl’ (that is, ‘a female child’), and though her problems are indeed, as it transpires, rather negligible on a global scale, they are at least amusing to listen to in their absurdity in this cast recording. Flic is an actress who hasn’t trodden the boards for some time and is thus working in the hospitality and catering industry – or, as she more bluntly puts it, she’s a waitress.

There’s more than a whiff of schadenfreude about even smiling at Flic’s predicaments, though it is difficult to resist with such jaunty music and some witty lyrics in this album – here’s one: “We’ve got to second base and I think we’re going for third!” The opening number is one of a number of tunes that sound like jazz numbers as opposed to ‘traditional’ musical theatre. The ‘I wish’ number that follows it expresses quite a simple desire, one which money can’t buy: with friends and acquaintances getting married all around her, she’d just like to be in a relationship herself. And already the discerning listener can see where this is going. She’ll either find a highly unlikely candidate (because, y’know, opposites attract) and marry him, or she’ll somehow come to terms
with her singleness and embrace the independence this brings, able to travel and do things that others find it more difficult to do, tied down as they are with a mortgage and dependent children and so on and so forth.

But there’s enjoyment to be had in going on Flic’s journey even if the end destination is unsurprising. That said, when the first couple of musical numbers are as jolly as they are here, however, it’s easy to get the feeling that things can only go downhill. But I didn’t expect the narrative to take a negative turn immediately. The third track begins thus: “Table for one, then back to the flat…” Oh dear. Now, having never used such services myself, I can’t vouch for the authenticity of how true to life Flic’s experiences with a dating agency are.

What I can say is that Lorna Want’s voice glides through the songs, many and varied as they are, seemingly effortlessly, an absolute pleasure to listen to throughout the recording. Smatterings of spoken word are included in the music, often to good and punchy dramatic effect. The character development is quite extraordinary, as the listener is taken through an emotional rollercoaster (a pleasurable one at that). There aren’t any of the belter tunes that West End and Broadway audiences give huge rounds of applause for (parodied so well in ‘The Song That Goes Like This’ in the musical Spamalot). But that is more than made up for the engaging and largely brisk songs in this cast recording, aided by Want’s ability to put considerable passion and, where required, intensity, in portraying the character of Flic.

That Flic writes letters suggests the story is set before the days of the ubiquity of instant messaging and social media. Either way, this album is a short and sweet coming of age story, and one that would work well as a full production in a studio theatre space.

On Monday 12th August 2019, SimG Records, the leading independent British label devoted to new musical theatre writers and artists, is to release GIRL IN A CRISIS.

With book, music & lyrics by Andrew Fisher, GIRL IN A CRISIS premiered in November 2018 at the Crazy Coqs in London as part of the Live At Zédel Season, and is a new one-woman musical developed and directed by Simon Greiff that tells a painfully funny story about growing up.

Flic is in a permanent state of crisis. A single, out-of-work actress, she survives by waiting tables, going home in the evenings to her manipulative cat, Miss Fluffington, at weekends she attends the weddings of her smug friends alone, and worst of all dreads that she will soon turn thirty. She is horrified to learn that her perfect younger sister is getting married. Will she be able to overcome her reluctance to find a date, or even love by the time of the wedding…?

The shows title song was shortlisted for the Stiles & Drewe New Song Prize at the Stephen Sondheim Society Student Performer of the Year.

The physical album is ‘due for release on Monday 12th Aug, and available here: