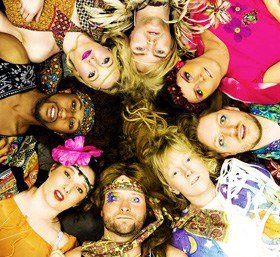 It is simply too dismissive to label Hair as just an evening of hippy shenanigans. It’s deeper than that, even if it takes a while to delve below the hedonistic heights of the ‘Age of Aquarius’ – this is, for the uninitiated, the development of the New Age Movement in the 1960s. The cast of 22 and band of 9 (very impressive for an amateur production of any musical) combine together to lift the roof off the Bridewell Theatre. Like any decent production of Hair, it counts as immersive theatre, with cast members coming right into the centre aisle, and audience members in the front row bearing the brunt of characters’ outbursts – usually of joy, mind you.

Such is the breaking down of the fourth wall that, as those very familiar with Hair will know (it has, pun acknowledged, a cult following), members of the audience are invited to give ‘The Tribe’ (the collective name for the show’s company) a run for their money and dance on stage alongside them for a moment, post curtain call. Now, it is necessary to reassure anyone who may feel a little apprehensive at even the thought of being on stage that this is entirely voluntary, and in the best interests of “harmony and understanding” (quoting the show’s opening number) nobody is in the slightest compelled or persuaded against their personal preference.

All very pleasant, then, in a show that is almost boundlessly energetic, whilst never overdoing it. Berger (Barry Lattimore-Quinn) gets to belt out “I Got Life”, a song I had until now more associated with Claude (in this production, Franciscus Prins), certainly based on my visit to the 2010 West End revival production. It works well with either lead, though, and overall, I must say I was impressed with how the many songs flowed in this production, as though woven into a tapestry. The larger West End show, a transfer from Broadway, felt comparatively stop-start in its approach, and felt jerky and disjointed. This production is a far smoother ride.

Interestingly, “Good Morning Starshine” in this production forms the Act Two opener – it usually appears much later in the second half. There’s sparing but effective use of projections towards the end, but not much earlier on in the way of setting the scene or giving the story some background; there are a number of characters who, despite them all being on stage more often than not, we know as much about at the end as we did at the beginning. The odd lyric here and there was sung so fast it could not be deciphered, and sound problems meant not everyone’s microphone performed as flawlessly as the cast did. These are fairly minor points, though: the best of amateur productions top the worst of professional productions, and this particular show is quite possibly the most engaging and enthralling amateur dramatics show I have come across – ever.

I found myself engrossed in what was going on in an extremely well-choreographed musical. Despite the moderately limited stage space at the Bridewell, the stage never felt overcrowded or bursting at the seams. And, as I say, it’s not all one big party; as thoughts turn to war and conflict, plus their implications, The Tribe tackles the subjects with tact and sensitivity, a step change from the devil-may-care approach evident in the entire first half.

Of the supporting roles, Dionne (Melisa Minton-Djoumessi) stood out for me with her powerhouse vocals, as did Sheila (Charlie Welch), ever the protester. Sure, it’s a bit dated. So much of it remains broadly relevant to today’s world, however, and it’s such a pleasure to watch a musical that is indeed all singing and all dancing, but also with more than enough of a gripping narrative to provide much food for thought. That so much of it still resonates, a whole half-century after its Broadway opening night, is a testament to what extraordinary show Hair is. It is more than done justice by this talented and enthusiastic company, who have undoubtedly “let the sun shine in”. While not exactly family viewing (in fact, it distinctly isn’t), this utterly splendid production is so exhilarating that it is almost exhausting, and provides an electrifying and memorable experience. “What a piece of work” is Hair!

Nearly 50 years after it was first performed in America, the original rock musical, Hair, will run at the Bridewell Theatre on Fleet Street, central London from 26 to 30 April in a brand new production. The show’s issues of intergenerational strife and war versus peace are as relevant as ever and ensure the musical still resonates today.

The hippie ideology of the late 1960s sought a new world order based on love, peace and harmony. The Tribe have chosen to live together in a commune led by the charismatic Berger. As they act out their lives, we glimpse their beliefs and vision for a better world. At a time when thousands of young men were going to fight in Vietnam, they refused, and dared for the first time to challenge authority.